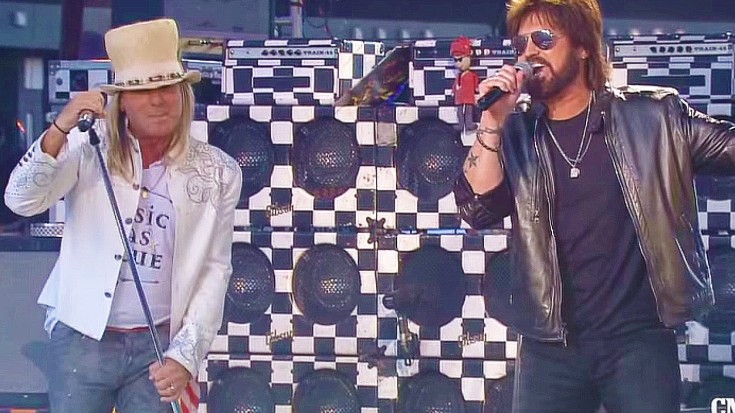 It’s been a big year for Illinois rockers Cheap Trick – between their new album Bang, Zoom, Crazy…Hello being released to glowing reviews and their April induction into the Rock And Roll Hall Of Fame, it’s no surprise that they were hand-picked to perform at tonight’s CMT Awards! In one of the most buzzed about performances of the night, Cheap Trick made their grand entrance into the country music world with the help of special guest and multi-platinum selling country legend Billy Ray Cyrus whose appearance marked his very first CMT performance in over 8 years, making this star-studded matchup an even bigger celebration for artists and fans alike.

Seamlessly blending together elements of rock, pop, and country for one high energy medley, Cheap Trick and Billy Ray brought the crowd to its feet with their spirited take on the Illinois rockers’ 1978 smash hit “Surrender,” but the night held an especially magical moment as they kicked things off with a cover of Elvis Presley’s “Don’t Be Cruel”. Made famous in 1956 by Presley, “Don’t Be Cruel” gave Cheap Trick a chart topping top-five single in 1988 and with Cyrus leading the charge, was the perfect way to celebrate the highly anticipated debut of his new CMT series Still The King, a comedy chronicling the life of a washed up Elvis impersonator as he gets his rock and roll career back on track.

Fearless and with a passionate spirit of adventure that keeps leading them down new and brilliant paths and trailblazing through different genres, these Illinois rockers embodied the spirit of rock and roll and represented it quite proudly on the CMT Awards stage tonight!