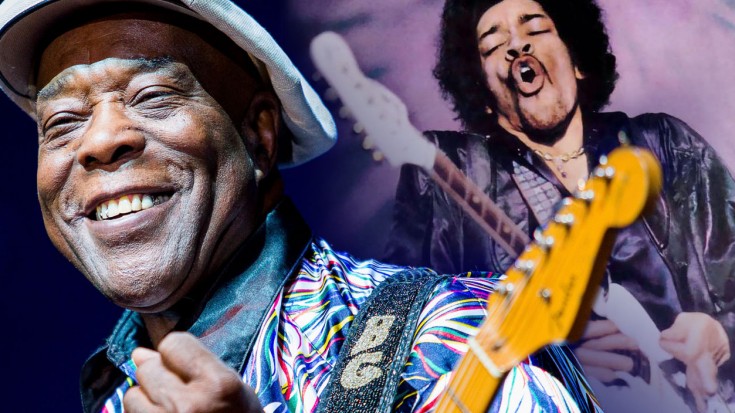 In the rock guitar world, all roads inevitably lead to blues legend Buddy Guy. At 79, Guy’s inspired everyone from Jeff Beck to Eric Clapton and Stevie Ray Vaughan, all of whom took Guy’s Chicago blues approach to the guitar and crafted stunning legacies of their own – but it’s this moment in the short career of late legend Jimi Hendrix that shows how far Buddy’s influence on rock guitarists really goes. In 1968, Jimi had the opportunity to check out one of Buddy’s performances at a small club and despite the admittedly poor quality of the video, you can see Jimi standing near the stage for the first half of the video, letting himself be bowled over as Buddy wails his way through “Stormy Monday”.

Fun Fact: The other guitarist you hear is ‘Steady Rollin’ Bob Margolin.

Jimi’s lifelong love affair with the blues finally comes full circle when towards the end of the video, he actually gets onstage with Buddy Guy and trades a few licks before launching into a blistering solo of his own at about 9:40. It’s not often that we get to see footage of two legends sharing a stage this way, and it’s even more rare to come across footage of Jimi Hendrix! Check it out in the footage below and like Jimi, let yourself be bowled over by the sheer amount of talent on one stage!