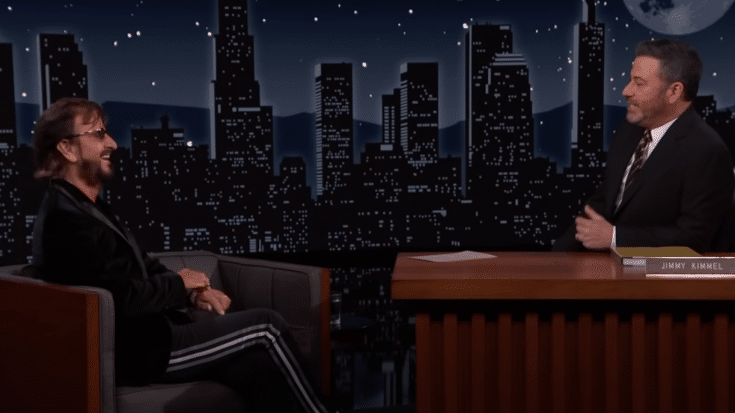 Legendary drummer Ringo Starr went on to Jimmy Kimmel Live! and talked about The Beatles documentary “Get Back,” Paul McCartney’s genius, his inspiration for the song “Octopus’ Garden,” and his new book Lifted.

Kimmel then recalled a moment in the documentary where Paul played the piano and Ringo was just watching him. Ringo said:

One of the biggest highlights on “Get Back” was the iconic rooftop concert of The Beatles on January 30 1969, where the band performed their final live gig as a group on the roof of the Apple Corps headquarters in central London.

Kimmel then took out a postcard that Paul sent to Ringo which that arrived the day after the concert in the rooftop. It dated back to January 31 1969 and read:

“You are the greatest drummer in the world. Really.”

When they talked about how he and George Harrison wrote the song “Octopus’ Garden,” Ringo shared:

“Well it came because on the White album, I left the band, and I left the band because I didn’t think I was being part of it and I was playing great… I went and knocked at John’s [Lennon] door and I said ‘man, I feel you three are so close and I’m out of it’ and he goes ‘I thought it was you three’ and then I went to Paul’s and I said ‘man, you know I gotta tell you I feel like I’m not part of the band and I’m not playing good and you three are really close’ and he said ‘I thought it was you three’ and I flew to Sardinia, I said ‘I’m getting out of here’ I went to Sardinia.”

Then he said “two things happened” in Sardinia, one is when the leg of his son’s nanny got wrapped up with an octopus, and two when the captain of the boat said that octopus find pretty rocks in the ocean and arrange it like a garden around them.

Ringo being stoned at that time immediately got his guitar and wrote the song which later he played with George.