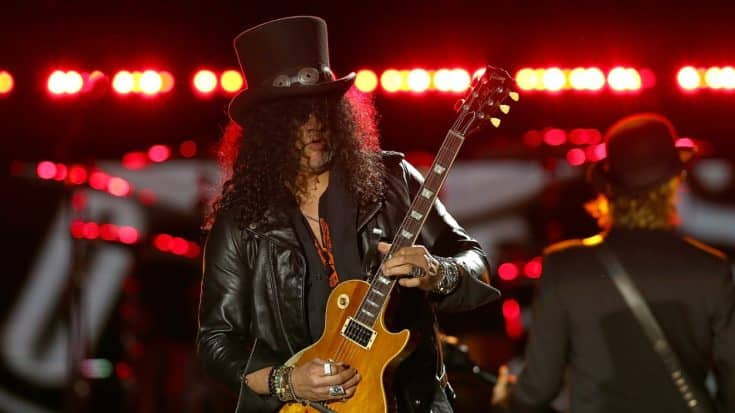 Guns N’ Roses announcing their reunion back in 2016 was undoubtably one of THE biggest stories of 2016, maybe even of all time. Since the announcement, the band has been on their ‘Not In This Lifetime’ tour that’s been raking in millions and millions of dollars everywhere they go.

With this tour absolutely crushing it and the band sounding as great as ever, it’s inevitable that we ask, “Are they going to make a new record?”, and despite that band’s attempts to deny this at every turn, it seems like one member has finally given into the madness and confirmed what we’ve been speculating for years now.

During a recent interview with TVK, guitarist Slash offered a major update on the band’s plans going forward and pretty confirmed the inevitable. Here is what he had to say.

“Axl, Duff, myself and Richard have all talked about… there’s material and stuff going on already for a new record. It’s just, with Guns N’ Roses, you don’t go, ‘Oh, there is a plan, and it’s gonna be like this,’ because that’s not how it works.”

“So, basically, the only real answer to give is we’re hoping to put a new record out, and we’ll just see what happens when it happens.”

I mean, let’s be honest, we were all sure that Guns N’ Roses would make a new record, but it’s still extremely exciting to hear it straight from horses mouth.

Time to get excited!