Report: Journey Members Neal Schon And Jonathan Cain Are In The Midst of A Nasty Feud—Here’s Why…. 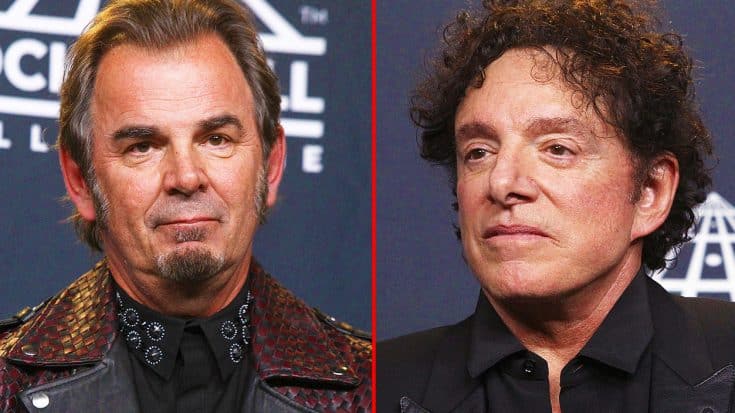 Every Journey has a rocky road

It’s only been two months since Journey was finally inducted into the Rock and Roll Hall of Fame. The band reunited with vocalist Steve Perry for the evening, and even though the band did not perform, it was great to see them all together on stage again.

It seemed like everything was going fine between the members of the band, but recently Neal Schon and Jonathan Cain have been publicly firing shots at each other. It seems like the feud is surrounded around who is the owner of the Journey name. Schon has taken subtle shots at Cain, by changing his Twitter name, and firing off a few crazy tweets and Instagram posts. Some examples are down below:

“I want to be elevated by whom I play with, not feel like I’ve got cement shoes. If anyone is unhappy they are not running my band, then they should leave. I’ve stated how I felt about mixing religion and politics and how our music is not of one religion – Democratic or Republican. This is and has been an issue with myself Mr. Cain and his now wife, since he married. I’ve had to fight this whole time to protect the brand I built with Steve Perry, way before Gregg and I picked Cain to replace himself when he wanted to retire from the road back then. Well frankly, I’m tired of having to defend all by my self. [Fellow co-founding Journey member] Ross [Valory] is no help.“- Schon said via Instagram.

“As Jon Cain said to me when we started to rebuild: You have keys and you are the main member. Convenient amnesia; I still have the keys; I’m not the problem.“- Schon said on Twitter. He also retweeted fan posts supporting his ownership of the band name.

Hopefully this doesn’t effect the band’s future and they can work things out civilly.