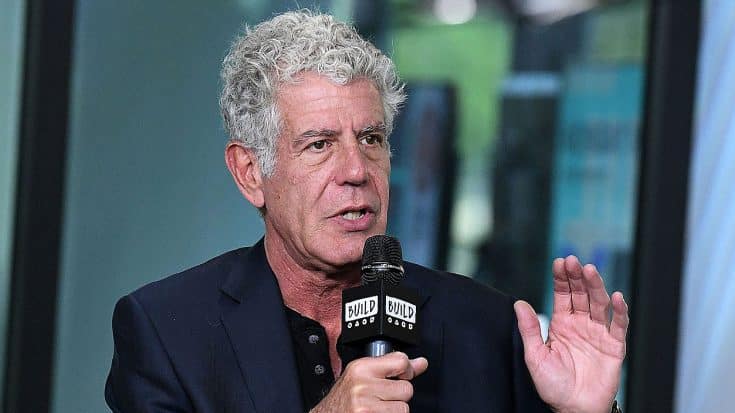 The Passing Of A True Pioneer

It is with the saddest of hearts that we have just learned that iconic chef, writer, television personality, and cultural enthusiast Anthony Bourdain has passed away at the age of 61. CNN confirmed that his cause of death was suicide. A close friend of his Eric Ripert found Bourdain unresponsive in his hotel room Friday morning.

CNN had this to say Friday morning regarding this sad news…

“It is with extraordinary sadness we can confirm the death of our friend and colleague, Anthony Bourdain. His love of great adventure, new friends, fine food and drink and the remarkable stories of the world made him a unique storyteller.”

Anthony Bourdain was known the world over for being one of the bravest and most adventurous people ever seen on TV. With his bold expeditions across the globe and his wanderlust for exploring different cultures and cuisines, Bourdain brought different parts of the world right into our home showcasing the beauty this world has to offer.

But what’s even more is that he was simply one of the kindest and most endearing people you could ever meet. Simply put, he was a gift we didn’t deserve.

Stunned and saddened by the loss of Anthony Bourdain. He brought the world into our homes and inspired so many people to explore cultures and cities through their food. Remember that help is a phone call away US:1-800-273-TALK UK: 116 123

In memory of Anthony Bourdain… pic.twitter.com/E6WDXi3Jc9

Anthony Bourdain gave so many of us the courage to walk through doors without signs, to approach a distant bonfire, to delve deeper into worlds and cultures unlike our own. Let’s keep exploring and traveling and listening to each other—it’s the legacy he deserves.

The suicides of Anthony Bourdain and Kate Spade this week are a reminder: No matter how successful, wealthy or seemingly happy you are, we all battle our own demons.

Reach out to one another. Destigmatize depression, addiction and anxiety.

We are all in this together.

Anthony. One of my idols. Unapologetic, passionate and one of the best storytellers on the planet. Thank you for making food so exciting. And always standing up for everything right. Horrible. Why why why. Be at peace now 🙁

I’ve brushed up against this darkness and I know it’s a tempting exit but REACH OUT to ANYONE. Stay on this side of it — in the light and warmth. Where you get to try again, every day.

I have to say I’m in total shock to hear that the amazing @Bourdain has just died ? he really broke the mould, pushed the culinary conversation, Rest in peace chef ?‍? ? thoughts and love to all his family and close friends xxxxxxxxxxx pic.twitter.com/HB7sV7CeRH

As @NASA searches for life on Mars, we lose the life of beloved Anthony Bourdain on Earth. Implicit and explicit reminders of how precious life is, anywhere in the universe.

Ah dammit! We lost a fine dynamic wonderful human being in the death suicide of my friend Anthony Bordain. God rest his…

"I would like people really to pay more for top-quality Mexican food. I think it's the most undervalued, underappreciated world cuisine with tremendous, tremendous potential. ⠀⠀⠀⠀⠀⠀⠀⠀⠀ These are in many cases really complex, wonderful sauces; particularly from Oaxaca, for instance, that date back from before Europe. I'm very excited about the possibilities for that cuisine, and I think we should pay more attention to it, learn more about it, and value it more. This is frankly a racist assumption that Mexican food or Indian food should be cheap. That's not right." ⠀⠀⠀⠀⠀⠀⠀⠀⠀ #AnthonyBourdain died of an apparent suicide at age 61. He was an advocate and true ally for the Latinx community. You will be missed. This is heartbreaking.

We lived vicariously thru the passions of Tony. I was assigned a session with @mensjournal and told that he typically doesn’t engage during a photo shoot, but I found just the opposite. Incredibly empathetic, and truly one of the most interesting individuals to sit down and have a beer with. #anthonybourdain

It truly goes without saying that Bourdain was, is, and forever will be a shining light to us all. Through his travels across the globe showcasing the beauty in different cultures, he helped bring the world closer together. He was a true inspiration and an example to live by. Rest in peace, Anthony Bourdain. You will be forever missed.