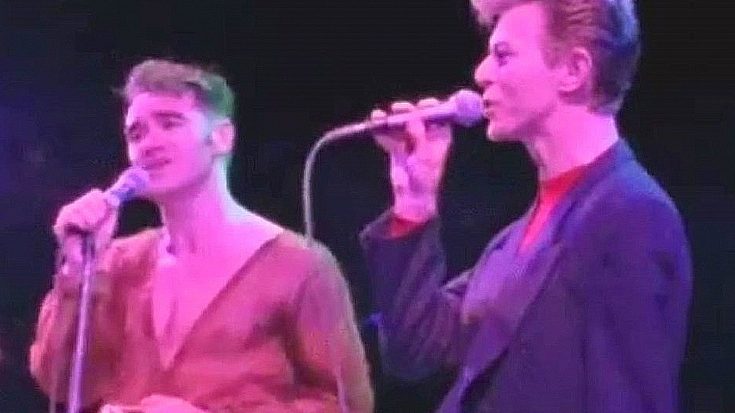 Long before Morrissey became a legend in his own right, he was a moody teenager growing up in Manchester, deeply infatuated with the artistry of icons like David Bowie and T. Rex frontman Marc Bolan. He had no way of knowing that 20 years later he’d be sharing a stage with David Bowie at the Los Angeles Forum trading licks to T.Rex’s 1971 classic “Cosmic Dancer” during his own headlining concert in 1991,but that’s precisely what happened as Bowie slinked onstage for the encore, seamlessly fitting into Morrissey’s show as easy as if it were his own.

“The 12-year-old within me – unable to leave for school unless I’d soothed my sickness with at least one spin of ‘Starman’ – bathes in the moment in disbelief. But there it is.”  — Morrissey, Autobiography

Sadly, there’s no video of the moment that Moz and Bowie dished out this T.Rex classic to a sea of hysterical fans, but we’ve got the next best thing – audio of their duet. Give it a listen and be sure to drop us a line in the comment section below and let us know which artist YOU would have loved to share a song with growing up!