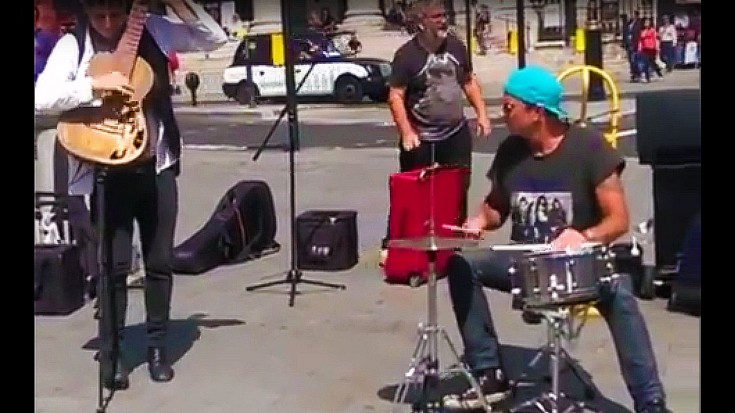 Musicians, take note – if you want to jam with one of your favorite musicians, we recommend taking your act to the streets because you’re liable to be joined by the likes of Aerosmith’s Steven Tyler or in this case, Chad Smith of the Red Hot Chili Peppers! Currently on tour in Europe in support of the band’s new album The Getaway, Chad made one lucky fan’s day when the drummer joined his street performance this week outside of London’s Trafalgar Square, armed with only a snare drum and a hi-hat and bringing a little  much needed funk to the guitar player’s impromptu street jam.

Fun Fact: Fans get Chad and actor Will Ferrell confused so often that it’s a running joke between the two friends. They’ve even appeared on Conan dressed identically and engaged in some pretty epic drum battles!

The two don’t appear to be playing anything in particular, which makes this even cooler  – Chad may be a world famous drummer for one of the biggest bands to walk the earth, but he’s more than happy to spend his day off spending improvised lick after improvised lick with another musician! The fan-shot video is fairly short – it runs at just under a minute long – but it’s so much fun to watch that we doubt you’ll be able to resist watching it more than once!