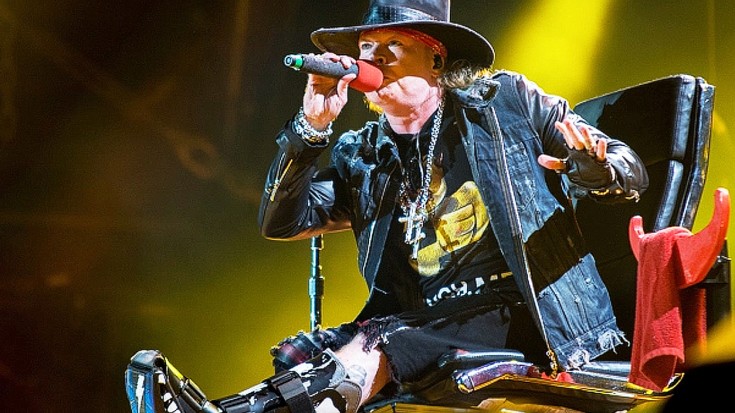 “Hello, Lisbon! Nice To Meet You, My Name Is Axl Rose!”

It’s official: AC/DC’s Rock Or Bust Tour is off to a winning start, due in part to the spectacular performance given by brand new frontman Axl Rose. In the weeks since it was announced that Axl would be joining AC/DC as a guest vocalist for the remainder of the band’s tour, his presence was met with criticism and overwhelming doubt – even Axl wondered if he was really the right man for the job – but Saturday night’s performance in Lisbon, Portugal proved to be a win for the singer whose performance is still receiving rave reviews from Rolling Stone, The Telegraph, and The Guardian.

With a setlist that included classics like “Back In Black” and “Shoot To Thrill,” AC/DC dominated every single moment onstage that night with Axl delivering one of the best vocal performances we’ve heard from the Guns N’ Roses singer in decades – seriously, it’s been decades since he’s sounded this good!

See what fans had to say about AC/DC’s showstopping performance once the curtain dropped:

To all those who rocked in Lisbon tonight, we salute you! ⚡️ #RockOrBusthttps://t.co/oPdMCu4UOQ

Though he’s still stuck in the chair for another week or two while his broken foot finishes healing (which shouldn’t be long; reports say he walked on and offstage unassisted during breaks and encores), that didn’t stop him from having a good time. We miss Brian something fierce, but after Axl’s stunning debut on the stage with AC/DC this weekend, something tells us the band is going to be alright.

Missed the action? Never fear – experience the excitement in the footage of “Shoot To Thrill,” located below!

“Rock or Bust”
“Shoot to Thrill”
“Hell Ain’t a Bad Place to Be”
“Back in Black”
“Got Some Rock & Roll Thunder”
“Dirty Deeds Done Dirt Cheap”
“Rock ‘n’ Roll Damnation”
“Thunderstruck”
“High Voltage”
“Rock ‘n’ Roll Train”
“Hells Bells”
“Given the Dog a Bone”
“Sin City”
“You Shook Me All Night Long”
“Shot Down in Flames”
“Have a Drink on Me”
“T.N.T.”
“Whole Lotta Rosie”
“Let There Be Rock”