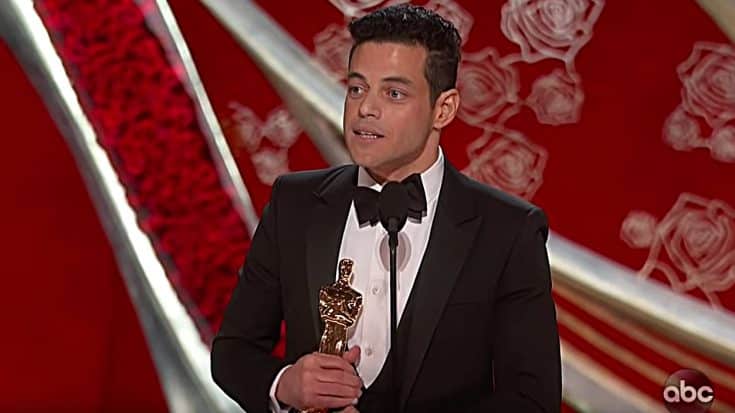 As if we didn’t see it coming. Last night at the 91st Annual Academy Awards when it came time to announce the winner for ‘Best Actor’, Rami Malek won the award for his stunning portrayal of Freddie Mercury in ‘Bohemian Rhapsody’ beating out Christian Bale, Bradley Cooper, Willem Dafoe, and Viggo Mortensen.

For this role, Rami also took home a Golden Globe, a BAFTA, and a SAG award. Rami’s win last night was surely expected, but that didn’t make it any less amazing when his name was called to the stage.

‘Bohemian Rhapsody’s’ road to its massive success surely didn’t come without its roadblocks. Believe it or not, this film was actually roughly 10 years in the making and is the passion project of Queen guitarist Brian May and drummer Roger Taylor. They had planned to make the film before with actor Sacha Baron Cohen directing the biopic and starring in the film as Freddie Mercury, himself.

Fast forward to present day, the band struck gold with Rami Malek. However, the film still encountered its struggles with director Bryan Singer being fired from the project just weeks before the end of principle photography. However, they would finish and produce a movie that wowed audiences all over the world.

Rami gave arguably the most gracious acceptance speech in the Academy’s history. He thanked everyone he possibly could and hardly a single participant in the film went unmentioned. It’s clear from his wavering voice that he feels as strongly about Freddie, the band, and film as we do.

Watch this heartfelt speech below and have some tissues ready.