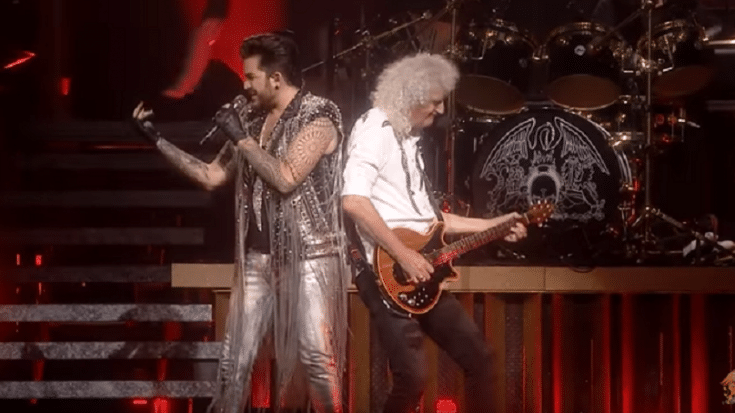 During a show last July 23, 2019 at the American Airlines Center in Dallas Texas, Adam Lambert, Brian May, and Roger Taylor teamed up with the Dallas Cowboy Cheerleaders for their performance of Queen’s 1978 classic hit “Fat Bottomed Girls.” Queen + Adam Lambert get unnecessary hate but honestly, Lambert is doing a fine job fronting the band. Sure, he’s no Freddie Mercury (that’s pretty much a given) but the guy knows how to put on a great show.

Just check out their performance below. He definitely looks like he’s having a grand time. And Brian May’s enjoying it too! As he shreds it like it’s nobody’s business, the cheerleaders back him up. In an interview with Mojo back in 2008, May was asked about Freddie Mercury’s convincing heterosexual delivery of the song. He said:

“On the face of it, it’s a heterosexual song because it’s called ‘Fat Bottomed Girls,’ but I was totally aware of Freddie’s proclivities and the fact he was going to sing it. Plus, some of the inspiration for the song came from stuff that I saw in Freddie’s life as well as my own. So it’s actually not so much of a heterosexual song as you might think (laughs). It’s a sort of pansexual song. There are so many ways you can take it.”

Watch a video of their performance and let us know what you think.