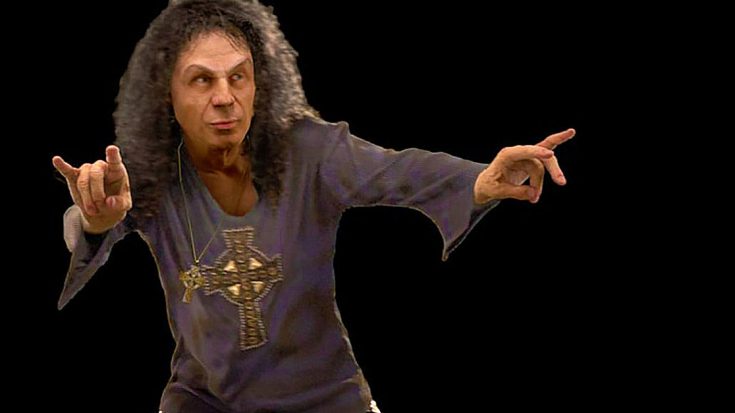 It’s been nearly a week since Ronnie James Dio got the chance to live again as a hologram at Germany’s Wacken Open Air Festival and while we’ve seen pictures and low quality footage of the event that had fans and critics buzzing for days, we’ve never seen the official pro-shot footage.

Until now, that is. Thanks to EyeIllusion, the hologram entertainment company behind Dio’s showstopping hologram last weekend, official footage of Dio’s hologram performing his 1984 hit “We Rock” with Dio Disciples has emerged and we’ll be completely honest: it’s a little creepy. Wonderful, but a little creepy in that Dio’s hologram is so incredibly lifelike, his mannerisms and stage presence captured down to such an art that it’s impossible to believe that you can’t reach right out and touch him or hug him as his widow Wendy Dio wanted to do when the shock of seeing her husband wore off.

Fun Fact: Typically, a hologram is a photographic recording of a light field, rather than of an image formed by a lens, and it is used to display a fully three-dimensional image of the holographed subject.

From his signature devil horns to the way his right leg bounces up and down in time to the band playing behind him, this is Ronnie James Dio as we remember him before his death more than 6 years ago and in a way it’s not, raising the very important question as to how ethical it is to bring back legends we’ve lost as holograms. Ethics aside, however, remembering the fact that Dio performed until his battle with stomach cancer proved to be too overpowering and suddenly seeing him healthy, happy, and back where he belongs – even if it is just a trick of light and shadow – is still pretty damn cool and a major turning point in the history of rock and roll.