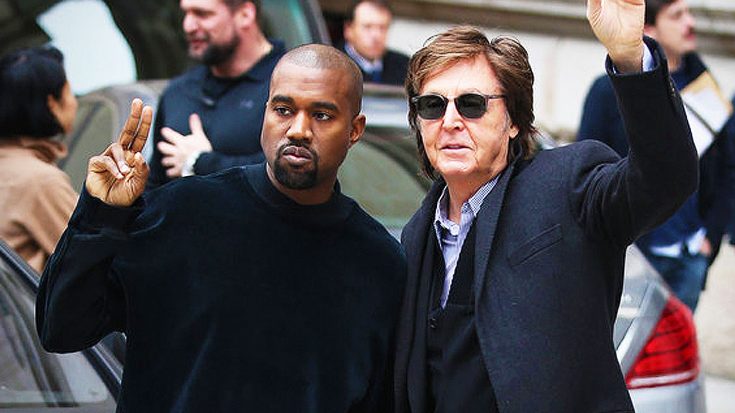 Kanye West is one of the most polarizing figures in music today. Whether you love him, or absolutley hate him, the guy has made an impact on the industry in one way or another. Kanye has also had some unique collaborations throughout his career as well. One of those collaborations was with Beatle’s legend Paul McCartney.McCartney and Kanye worked together on Kanye’s songs “All Day,” “Only One” and “FourFiveSeconds,” which were major hits last year. In a recent interview, McCartney recalled the process of working with Kanye, saying that his creative method was similar to Andy Warhol.

“I didn’t know his system. I’d heard things like, ‘He’s got a room full of guys working on riffs, and he walks around going, ‘I like that one.’ It reminded me of Andy Warhol, these artists who use students to paint their backgrounds and things. It’s a well-used technique.”- McCartney said.

McCartney also recalled how he played Kanye a whistle sound he had recorded back in 1969, which Kanye actually ended up incorporating into “All Day.” As far as calling Kanye a genius (a word Kanye has self-proclaimed himself to be) McCartney was unsure if the word was the right fit for him.

“I don’t throw that word around [laughs]. I think he’s a great artist.”- McCartney said.

It’s nice to see McCartney appreciating today’s popular music. He truly respects all musicians, and does a great job of expanding his tastes and experiencing new styles and methods.

Check out the music video for their song “FourFiveSeconds” down below!