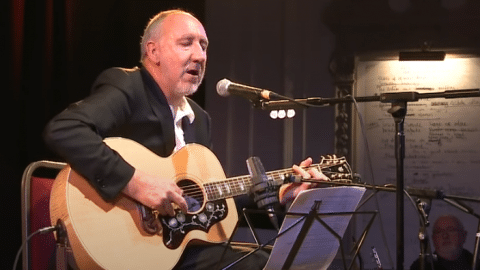 The Who’s Pete Townshend recently tried to develop a lost song of his band during the 1970’s but it wasn’t good enough to release.

Townshend revealed his plans for a graphic novel based on Lifehouse concept, the unfinished science fiction rock opera by the Who. In an interview with Mojo, he said:

“I actually don’t have any. I mean, 2021 would have been the 50th anniversary of the Who’s Next album and a good opportunity to do a box set and to have conversations about it. But we missed it for obvious reasons. And so in 2022, there is a box set, and the box set is to some extent being perfumed by the fact that I’ve been working with a guy called Jeff Krelitz on a Lifehouse graphic novel, and we’re hoping that that will come out around the same time. There’s talk of a documentary, all of this stuff. It makes me want to run away!”

“the record company had found a track they said was from the Lifehouse sessions. This track, called ‘Ambition,’ had Keith Moon, John Entwistle and me playing on it. And then I found a demo that I had done at home with a vocal. So they were like, ‘Well, let’s just get Roger [Daltrey] to do a vocal on the version that the other guys in the band did, and we can add it to the record and it will be brand new.’ So I spent a week reconstituting or finishing off the demo, sent it to the record company, and they said, ‘Ahhhh, no… maybe you could put it on a solo album?’ So I said, ‘Well, you know, there’s a reason it’s never been released before. It’s because it’s crap!’”

The guitarist recalled that Lifehouse was based around,

“a possibility of a technological breakthrough which is part of a music album. And that’s what I still yearn to see happen, you know, whether I pull it off or whether somebody else pulls it off.”

Abandoning the idea, he said:

“I don’t think it’s possible now. I think it was just the way I was thinking at the time. A lot of that was post-art school thinking.”