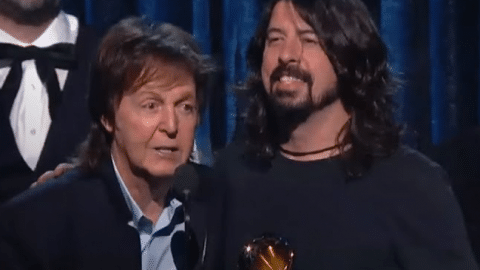 The Rock & Roll Hall of Fame has announced the list of speakers for the 2021 induction ceremony. Presenters for this year’s inductees include Paul McCartney for Foo Fighters. The event will take place on October 30 at the Rocket Mortgage FieldHouse arena in Cleveland, Ohio.

It’s fitting for Macca to induct Foo Fighters because they have quite a history. Frontman Dave Grohl was part of the Backbeat band, and he also participated in a Grammys Beatles tribute. He also joined forces with McCartney on the Sound City soundtrack for the song “Cut Me Some Slack.”

In a recent interview, Grohl even revealed that McCartney gave his daughter her first piano lesson.

“We have wine and pizza and we were hanging out, and it was time for Paul to go,” Grohl said on The Graham Norton Show. “Paul and [his wife] Nancy were leaving and there was a piano in the corner of the room, and he just can’t help himself.”

“So he sits down at the piano and starts playing ‘Lady Madonna,’ in my f***ing house!” he continued. “My mind is blown. I can’t believe this is happening. This is like the most crazy full-circle moment of my entire life.”