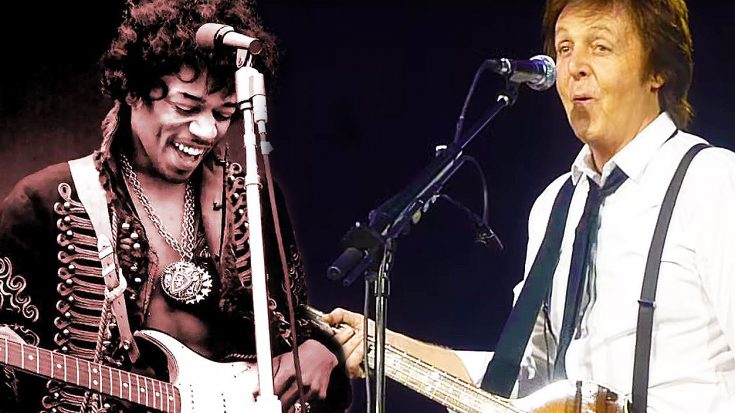 The 1960s were an incredible time to be alive. The Beatles’ career was in full swing, Eric Clapton was shredding in Cream and The Yardbirds, and Jimi Hendrix was on top of the world as a guitarist in his prime. If you were alive during this decade, you were treated with some of the best music ever to grace this earth.

Luckily we are fortunate to have a few of these artists still alive today, that can share stories and memories of the great era of the 60s. One of these artists is Paul McCartney. During one of his recent concerts, McCartney shared a hilarious untold story about Jimi Hendrix and Eric Clapton.

McCartney recalled the night in Toronto when Jimi opened his own concert with the Beatles song “Sgt. Peppers Lonely Hearts Club Band.” The song was only a few days old at the time, because the concert was on a Sunday, and the album was released the Friday before. Jimi and the band learned the song an hour before the concert. Paul recalled Jimi’s amazing and impressive performance, and shared that after he finished playing, he looked into the audience and asked, “Is Eric there?” He was looking for Eric Clapton, because he used the whammy bar on his guitar so much, that he put it wildly out of tune. Jimi needed Eric to tune it for him! Eric was there, but hid so he couldn’t be seen easily!

The way Paul tells the story is absolutley hilarious! You can watch it for yourself down below, but be prepared to laugh!