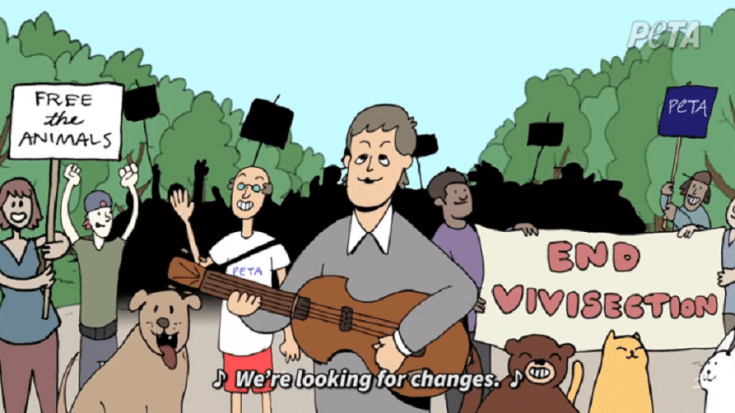 via PETA (People for the Ethical Treatment of Animals)/YouTube

He Is Transformed Into A Cartoon For PETA

Paul McCartney stars in a new animated music video for animal rights group PETA which is set to his 1993 rocker “Looking for Changes” from his solo album Off the Ground. Both Paul and Linda McCartney became vegetarians in 1975. He is also the creator of the Meat Free Monday movement which he launched in 2009.

Paul donated the song to PETA for their campaign to end animal testing.

He said, “I’m looking for changes that will continue the momentum of getting animals out of laboratories. Experiments on animals are unethical — they’re a colossal failure and a waste of time and money. We can and must do better.”

In a press release PETA (People for the Ethical Treatment of Animals) wrote: “Studies show that 90% of basic research—most of which involves experiments on animals—doesn’t lead to treatments for humans. Government officials also admit that 95% of all new drugs that test safe and effective on animals fail in human trials, either because they simply don’t work or because they cause adverse effects.

“Despite this, researchers still receive grants to test on animals, so across the U.S., millions of animals are locked inside barren laboratory cages, poisoned, burned, cut into, emotionally traumatized, and infected with diseases while they suffer from extreme frustration and loneliness. No experiment is prohibited by law—no matter how painful or irrelevant—and almost all animals used in tests are later killed.”