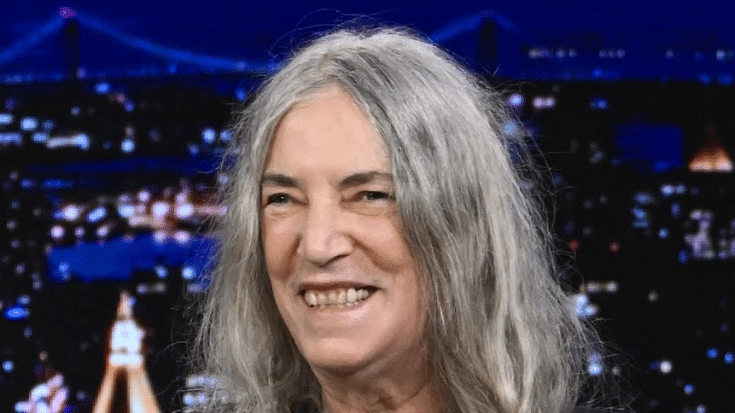 The American singer-songwriter Patti Smith was recently invited to The Tonight Show Starring Jimmy Fallon. There, the icon discussed some of the things she did in the past including how she ended up writing a song with his former husband, Bruce Springsteen.

The host gave her a warm welcome saying that he was happy to see her. Fallon then went straightforward and asked her about “Because The Night,” a song that Smith and Springsteen recorded together. Smith revealed:

“Well, we sort of, worked separately together.”

Smith said that Jimmy Iovine produced the song and sent her the tape. Iovine kept on calling her to remind her to listen to the tape, but she refused many times. One night Smith decided to play the tape while waiting for a phone call from her long-distance husband-to-be, Fred, who calls her once a week because international calls were so expensive at that time.

She thought that it was a good song, so while waiting for Fred’s call, the icon has already done writing the lyrics to it including the lines: “Have I doubt when I’m alone Love is a ring, the telephone”

Smith is thankful to Iovine and Springsteen for playing a role in giving her biggest hit. Aside from that, they also discussed Smith’s book, A Book of Days, which Smith has made during the pandemic. It was a book which is basically a compilation of photographs with footnotes on it.

There, Fallon found a photo of Smith and the famous Keanu Reeves together. Interestingly, Smith didn’t know that Reeves is famous not until her photo with him was liked and commented on by more than 80,000 people on Instagram. She revealed that after that incident, she did a little “research” which led her to watch all the John Wick movies.

You can watch the full interview below.