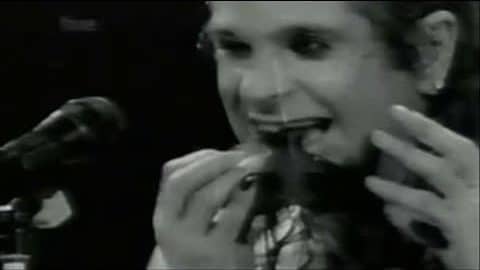 The Prince Of Darkness said a couple of years ago that he will be remembered for his bat-biting incident that happened on January 20, 1982. He bit the head off a live bat during concert in Des Miones, Iowa, thinking it was a toy thrown by the audience.

The rocker said in a 2008 interview of the bat-biting experience:

“It must have been stunned by the lights or something because it just froze and I thought it was a toy.

“I just put it in my mouth. Then its wings started flapping and I got such a shock. I tried to pull it out too quickly and its head came off.”

Osbourne reportedly went to Mercy Hospital Medical Center and was referred to Broadlawns Medical Center for the available rabies vaccine. According to the Des Miones Register, he was given a tetanus and rabies shot until finally took enough rabies vaccine to complete it.

Des Miones’ then-mayor Pete Crivaro wanted to find out if Ozzy violated an agreement on the use of animals for his act. The manager of the auditorium Dave Palmitier said that Osbourne did let some doves loose, which he wasn’t supposed to. Later then, they found one dead that was been killed in the audience.

Des Miones’ then-police lieutenant Derald Learning said he warned Osbourne’s manager before the show that they were going to jail if an animal is harmed because it’s against Iowa law. The incident became the main focus of an episode of a TV Land original television series “Myths and Legends.” Nearly four decades later, the bat-biting story still remains memorable throughout rock history.