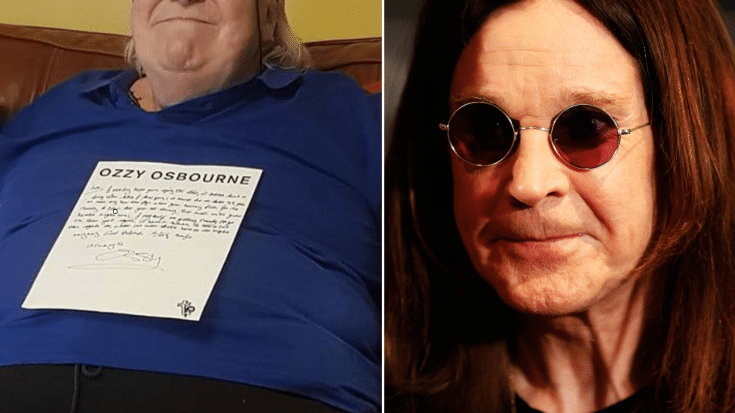 It was all Lee Kerslake wanted. Now, as his days wind down, he can die a happy man.

The former Ozzy Osbourne drummer made headlines late last year when he publicly appealed to Ozzy and Sharon Osbourne to “kindly send me platinum album certifications…to hang on my wall before I die,” revealing that he’d written to the couple in hopes that his appeal would convince them to grant his final wish.

Kerslake, 71, appeared on Blizzard of Ozz and Diary of a Madman – Osbourne’s first two solo albums following his departure from Black Sabbath – but due to drawn out legal disputes over album rights and credits never received the accolades typically given to those involved in the making of a successful album.

That all changed on Friday.

Ozzy Osbourne, 70, sent Kerslake two platinum certifications for Blizzard of Ozz and Diary of a Madman. A photo was taken of a smiling Kerslake embracing the awards, with a personal letter from Ozzy sitting on his stomach, which was shared to Ozzy’s official Facebook account bearing the caption, “I’m so glad that Lee Kerslake is enjoying his Blizzard and Diary platinum albums. I hope you feel better. Love, Ozzy.”

I’m so glad that Lee Kerslake is enjoying his Blizzard and Diary platinum albums. I hope you feel better. Love, Ozzy

Kerslake’s battle with cancer has been well documented since 2015, when he was initially diagnosed. Treatment was reportedly going well with Kerslake expected to “be around for a good while yet,” but in December he revealed that he now had bone cancer and that the prognosis, sadly, wasn’t a positive one.

“I now have bone cancer, which is a nasty one, so the doctor gave me about eight months to live. But I’ve been fighting all the way,” he promised. “Five years ago they gave me four years to live, and so that gives you an idea. I’m fighting it and there’s no telling what can happen. All this time I have had this terminal cancer, but I have defied it because the music kept me fighting.”

We’re hoping that Lee’s new platinum certifications are just what the drummer needs to continue fighting and kicking cancer in the ass so that he can stay with us a while longer.