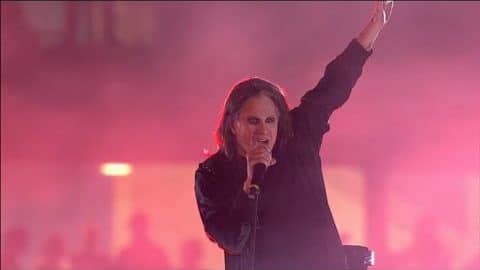 One of the highlights of the closing ceremonies of the Commonwealth Games is the performance of Ozzy Osbourne and Tony Iommi. A mini reunion for the two former Black Sabbath bandmates in their very own hometown, Birmingham, England.

It initially began with a brief snippet of “Iron Man,” the group’s classic 1971 single. Osbourne then rose up onto the stage, which gave delight to the Birmingham crowd, eventually joined by Iommi during the rousing rendition of “Paranoid.”

The two were also joined by bassist Adam Wakeman and drummer Tommy Clufetos for the performance. “I love you all Birmingham! Good to be back!” Osbourne shouted at one point during the “Paranoid,” while fireworks flew high above Alexander Stadium.

“Thank you, goodnight! You are the best. God bless you all. Birmingham forever!” the singer declared following the song’s final note.

The Commonwealth Games appearance was Osbourne’s first public performance since 2019. The last time was when the heavy metal icon shared the stage with Post Malone at the 2019 American Music Awards.

Osbourne has been suffering from health issues in recent years. A serious hand infection in 2018, dislodged pins in his spine in 2019, and was diagnosed with Parkinson’s disease in 2020. Most recently, he underwent surgery on his neck and back in June.

You can check out the video performance below.