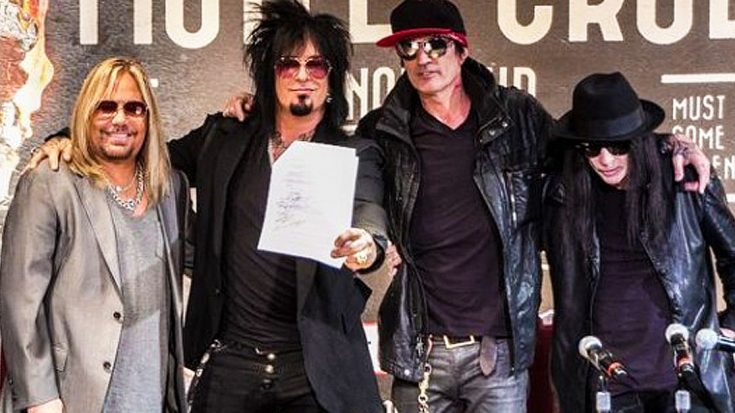 “It Really Was Surreal – Know What I Mean?”

You know, for a band that’s been retired for coming up on nearly a year now, we’ve heard more about Mötley Crüe in the last 9 months than we have in the last 9 years. The drama continues as Mötley Crüe frontman Vince Neil revealed in an interview this week that at the band’s final show on New Year’s Eve, he was the only one who was visibly emotional at the realization that this was really the end of the road for the band that’s been his entire life for over 30 years.

“I think I was the only one in the band who got emotional. It all kind of came together that night. ‘This is it,'” says Neil, who is currently facing charges for an assault on a female fan in Vegas earlier this year.

“There were a lot of emotions that came into my head,” he added. “It really was surreal — know what I mean?”

This isn’t the first time a member of Mötley Crüe has spoken out about the events of that final show at LA’s Staples Center; just a few months ago, Tommy Lee came forward to express disappointment with the fact that no one said goodbye to him at the band’s after party that night, revealing that bandmate Nikki Sixx actually unfollowed him from Twitter the following day and that tensions within the band were at a fever pitch by the time the band took its final bow. Nikki Sixx was quick to retort, saying that despite what the media was reporting, Mötley Crüe ended on the best of terms humanly possible with each of the four excited to start the next chapter of his career.

Maybe Vince was emotional that night – anyone in their right mind would be – but it’s unfair to assume that his bandmates weren’t equally blown away that after 3 decades together, this was really it. See the emotion of the last ever Mötley Crüe show in the footage below as the boys perform “Home Sweet Home” for the final time!