Now What? The Fate Of Axl Rose With AC/DC 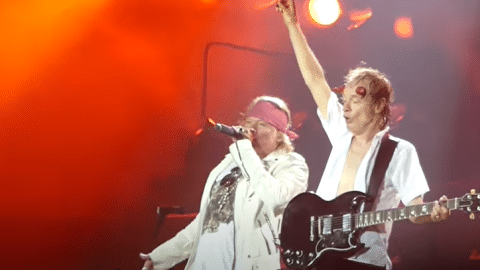 With frontman and lead singer Brian Johnson back into the fold, we can’t help but wonder about Axl Rose’s place in all of this. He stepped in after Johnson’s hearing problems forced him to leave the group in the middle of their Rock or Bust Tour in 2016. Axl Rose ended up fronting AC/DC during the European and North American legs of their massive trek.

In a new interview with Total Guitar, guitarist Angus Young revealed that Rose continuing with the band after “never really came up.”

He added, “Axl was really very generous, and he helped us out to get through our touring side at a difficult spot. He had contacted us and said he could help if it didn’t interfere with his own commitments of what he was going. … He wanted to come in and try songs that he himself liked, and he was suggesting songs I hadn’t played in a long time. I’m definitely grateful that he volunteered, and that had helped us finish off our commitment. But he has his own life.”

Although fans were skeptical and even angry when it was first announced that Axl Rose would be singing AC/DC’s classic hits at their concerts, it wasn’t long before the Guns N’ Roses frontman proved all the haters wrong. He’s no Brian Johnson but he could definitely hold his own and he clearly delivered the goods.