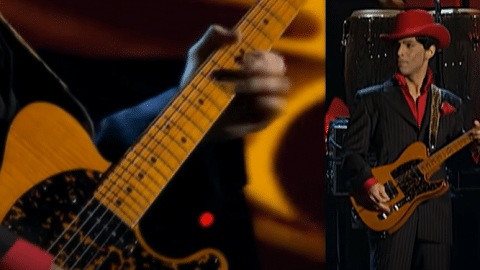 Only Prince can be part of a star-studded lineup and almost effortlessly steal the spotlight. During the 2004 Rock and Roll Hall of Fame induction ceremony, Tom Petty, Jeff Lynne, Steve Winwood, Dhani Harrison, and the Purple One paid tribute to the late legendary rocker George Harrison by playing one of his finest compositions – The Beatles’ “While My Guitar Gently Weeps”.

It’s an unforgettable performance but Prince took it to the next level with his iconic searing solo.

Joel Gallen, director and producer of the original Hall of Fame broadcast, recently uploaded a new Director’s Cut on YouTube.

“17 years after this stunning performance by Prince, I finally had the chance to go in and re-edit it slightly – since there were several shots that were bothering me,” Gallen wrote. “I got rid of all the dissolves and made them all cuts, and added lots more close ups of Prince during his solo. I think it’s better now. Let me know what you think.”

This version is cleaner, more mesmerizing, and only served to highlight Prince’s virtuosity on guitar. It’s like we’re watching this in the front row. Oh and by the way, it still doesn’t show where his Tele-style H.S. Anderson Mad Cat landed.