Neil Young Salutes Bob Dylan, Jimi Hendrix With “All Along The Watchtower” 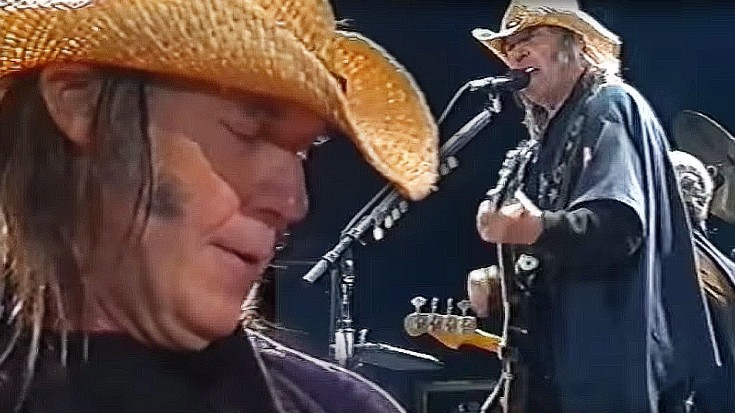 Written in 1967 and featured on Bob Dylan’s album John Wesley Harding, ‘All Along The Watchtower’ has seen many incarnations in the 48 years since its debut. Jimi Hendrix gave it the psychedelic royal treatment in 1968 with a rendition that was so innovative that Bob Dylan refused to play it any way other way after that, and the Grateful Dead made it a concert staple for the first time in 1987.

One of our favorite renditions, though, comes from singer-songwriter Neil Young; in 2002, he took the stage at Farm Aid with Booker T and the MG’s for a performance of ‘All Along The Watchtower’ that brought the house down and remains a huge fan favorite to this day.

Fun Fact: In 2008, Total Guitar magazine voted this as the best cover song of all time.

What we love about this particular performance is the fact that Neil is normally pretty subdued onstage; sure, he walks around and interacts with the crowd, but we get to see him take on the role of guitar hero as he plays ‘All Along The Watchtower’ as Jimi wrote it, blistering guitar parts and all. It’s heavier than we’re used to hearing from Neil, and it’s so good that it makes you wonder why Neil never took up a harder brand of rock and roll – he certainly has the talent for it!