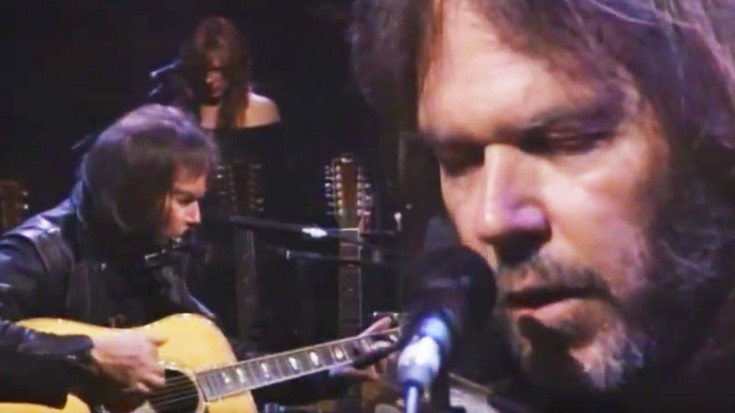 From Neil Young’s unforgettable album Harvest Moon, this relaxingly seductive ballad makes you feel as though you are going to float away to the soft, sweet sounds of his charming voice. Once again, inspired by the moon, Neil’s “Harvest Moon” is about a man that continues to claim that he still loves his ex, professing his undying love to her throughout the song.

Interesting Quote: “Before there was organized religion, there was the moon. The Indians knew about the moon. Pagans followed the moon. I’ve followed it for as long as I can remember, and that’s just my religion. I’m not a practicing anything, I don’t have a book that I have to read. It can be dangerous working in a full moon atmosphere, because if there are things that are going to go wrong, they can really go wrong. But that’s great, especially for rock ‘n’ roll.” – Neil Young

Performing this incredibly beautiful set, Neil graces the MTV Unplugged stage back in 1972 with the stunning, acoustic rendition of the heartfelt and sweet melody. As a “sequel” to Young’s Harvest album, “Harvest Moon” functions as the perfect musical closure, the album went gold in January of 1993, platinum in February of 1993, and multi-platinum in 1997.

Come a little bit closer
Hear what I have to say
Just like children sleepin’
We could dream this night away.

But there’s a full moon risin’
Let’s go dancin’ in the light
We know where the music’s playin’
Let’s go out and feel the night.

When we were strangers
I watched you from afar
When we were lovers
I loved you with all my heart.

But now it’s gettin’ late
And the moon is climbin’ high
I want to celebrate
See it shinin’ in your eye.