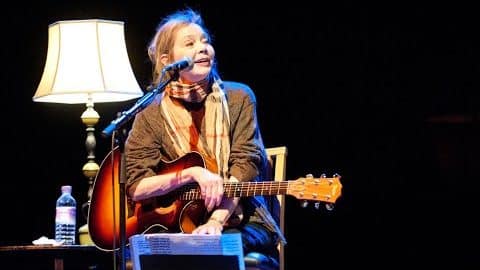 Grammy-winning folk and country songwriter Nanci Griffith died on Friday in Nashville, Tennessee at the age of 68. Her manager confirmed her death to Rolling Stone, but the cause of death was not given.

She’s best known for popular songs like “Love at the Five and Dime,” “Once in a Very Blue Moon,” and “Outbound Plane.”

Born on July 6, 1953 in Seguin Texas, Griffith started performing as a teenager. She played at clubs and festivals around Texas. Although she began a career in teaching, she eventually pursued her passion and switched to music full-time in 1977. She wrote several famous recordings, but she never had a big radio hit of her own. Her songs that achieved success were recorded by other artists.

She battled and survived thyroid and breast cancer in the late 1990s.

“Artists don’t choose to be artists, writers or singers,” Griffith said in an interview in 2010. “It’s just something you know you have to do.”

Following news of her death, tributes from several artists have been pouring in. Don McLean paid tribute to her by releasing a statement.

“Nanci was a lovely person,” he wrote. “I worked with her on a TV special we did for PBS TV and on that show, we sang two duets. They were And I Love You So and Raining in My Heart. I never heard anyone sing harmony in a more beautiful way.”

“We should have done an album together,” he continued. “At this taping in Austin, Texas she brought her father to see it. I really loved her spirit it was warm and loving and I’m really sorry to hear she has gone.”