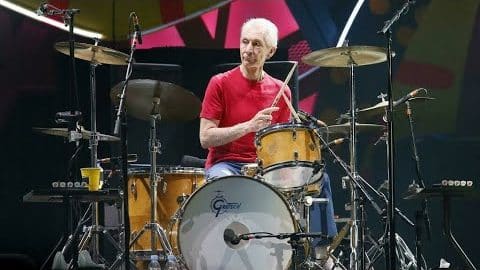 Check Out The Tributes Below

The Rolling Stones will never be the same again following the death of drummer Charlie Watts. He previously announced that he was going to miss out on the band’s upcoming tour to recover from a medical procedure.

Just minutes after news of his passing broke, Rolling Stones posted a statement across their social media channels expressing their “immense sadness” over Watts’ death and calling him “one of the greatest drummers of his generation.” It wasn’t long before tributes from his peers and other rockstars poured in.

From bandmate Mick Jagger to Elton John, Brian Wilson, and many more, they continue to honor the legendary drummer with posts.

Paul McCartney went the extra mile by sharing a video message where he offered his condolences to Watts’ family and bandmates.

“Charlie was a rock and a fantastic drummer. Steady as a rock,” he added.

Elton John called Watts “the ultimate drummer” and “The most stylish of men, and such brilliant company.”

“Full Moon. Rainbow. Always a sign. Charlie Watts wept at Keith Moon’s funeral,” The Who’s Pete Townshend wrote on Instagram. “I wish I was capable of such tears today. Instead I just want to say goodbye. Not a rock drummer, a jazz drummer really, and that’s why the Stones swung like the Basie band!! Such a lovely man.”

Joan Jett referred to Watts as “the most elegant and dignified drummer in rock and roll.”

A very sad day. Charlie Watts was the ultimate drummer. The most stylish of men, and such brilliant company. My deepest condolences to Shirley, Seraphina and Charlotte. And of course, The Rolling Stones.

I’m just shocked to hear about Charlie Watts. I don’t know what to say, I feel terrible for Charlie’s family. Charlie was a great drummer and I loved the Stones music, they made great records. Love & Mercy. pic.twitter.com/C4q2zXvVKo

I first saw The @RollingStones in 1966 in the Bay Area and have been a fan ever since. Charlie Watts was one of the great drummers and will be missed. Rest easy Charlie pic.twitter.com/FQKOXiSUpG

I knew him a bit I used to meet him on the train when I used to go to Devon years and years ago.he was a great drummer and a great guy a one off sorry Charlie #charliewatts @RollingStones 2/2

A post shared by This is Patti Smith (@thisispattismith)

Charlie Watts was the most elegant and dignified drummer in rock and roll. He played exactly what was needed – no more – no less. He is one of a kind. pic.twitter.com/aasPZ2fMYX

Charlie’s drumming is powerful and unique. His approach is entirely his own and helped shape the sound of rock and roll. Blessings Charlie Watts.

Rock n roll would not be rock n roll without the rhythm, the style, the VIBE of this incredible musician. Rest In Peace #CharlieWatts, one of the greatest and most important architects of the music we love. pic.twitter.com/xEfzaSLCba

Rolling Stones drummer Charlie Watts dies aged 80 https://t.co/LUVShR1yaM via @YahooNews AWFUL NEWS. One of the true timeless icons and the backbone of the Stones. Hard to fathom the loss. So very sad.

So saddened to hear about the passing of Charlie Watts . An absolute inspiration to a legion of drummers since the 1960’s. A man of grace , style , dignity and composure . pic.twitter.com/Nu4msDShAF