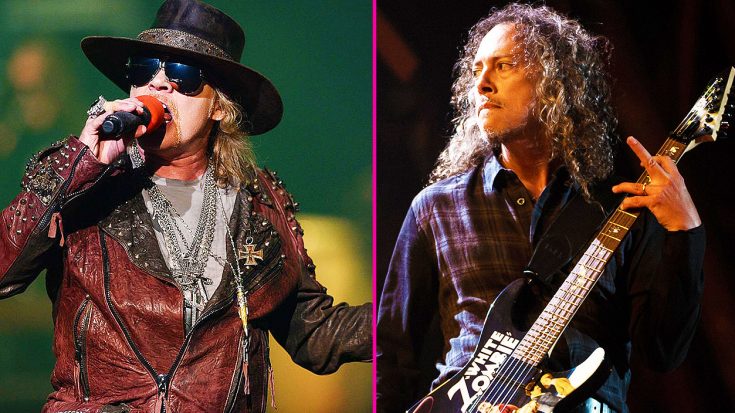 Some fans will agree, some definitely won’t

This Friday, metal gods Metallica will finally release their long anticipated tenth studio album Hardwired…to Self-Destruct. Everyone is anxious to hear what sort of epic tricks Metallica will be hitting us with, and if they will spark an epic comeback, or extremely underwhelming one. It’s a lot of pressure on the band.

But while Metallica builds anticipation, many other bands have also sparked their comeback this year, most notably Guns N’ Roses. GNR embarked on a massive tour, that grossed a huge amount of money and positive reception. In addition, the band is expected to be releasing a new album sometime next year! While many are happy about GNR’s return, some have other opinions. Metallica’s guitarist Kirk Hammett offered his thoughts on GNR’s triumphant return.

“Unfortunately, they’ve turned into somewhat of a nostalgia act, which to me is kind of sad.”– Hammett Revealed.
James Hetfield also added his opinion, by saying: “I don’t want to think we’re trying to stay young by writing new stuff, but it makes us feel relevant. It makes us feel like we’re still progressing.”

Hetfield and Hammett Believe that the band shouldn’t be solely touring behind old material, because it’s just carrying on an old act. Instead, they need to progress, make new material, and then tour. I guess to each their own right?

Obviously this was all stated out of respect, and not meant to be a diss. But hopefully GNR takes Hammett’s advice to heart, and comes back with some awesome new material, and launches another tour!