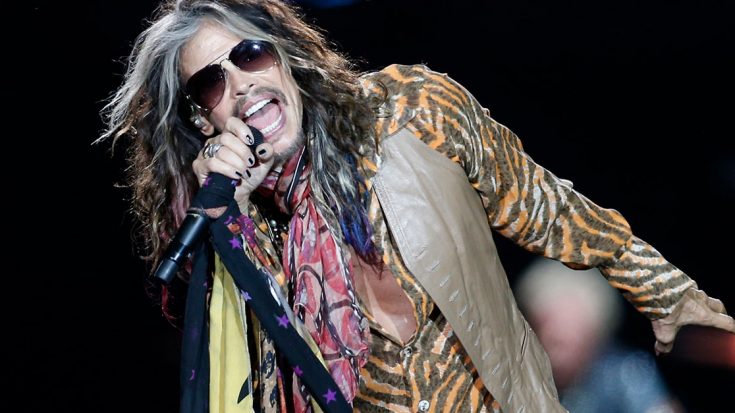 Steven Tyler’s been a busy man! In between taking the world by storm with his debut country album We’re All Somebody From Somewhere and plotting Aerosmith’s 2017 farewell run – appropriately dubbed the ‘Aero-Vederci, Baby! Tour’ – the 68 year old rock legend found time to appear at the T-Mobile Arena in Las Vegas, Nevada during Professional Bull Riders’ PBR Finals Week where he performed “Hold On (Won’t Let Go),” the official anthem for the Professional Bull Riders’ CBS television broadcasts and live events. The night wasn’t all cowboys and Steven’s gritty brand of country music, though; fans were treated to an all-star performance of some of their favorite Aerosmith tunes, ranging from “Walk This Way” to one of our personal favorites, “Sweet Emotion”.

Fun Fact: Steven’s found success in the country world, with We’re All Somebody From Somewhere debuting at number 1 on the Top Country Albums with 16,800 albums sold.

Admittedly, it’s a little weird hearing Steven jam “Sweet Emotion” with The Loving Mary Band instead of his usual Aerosmith bandmates, it’s easy to see why he’s so comfortable performing with them – they rock, even incorporating a banjo into the mix! Whether you’re a die-hard fan of Steven as a country artist or can’t stand the thought of him putting aside his rock and roll roots in favor of country music, there’s no denying that our favorite frontman is every bit as electrifying as ever and when it comes to delivering the classics, nobody does it like our man Steven!