Metallica Teams Up With Miley Cyrus To Perform ‘Nothing Else Matters’ 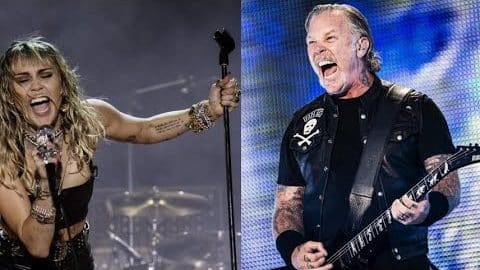 For the past few years, Miley Cyrus has proven she could hold her own in rock ‘n roll. She may not be everyone’s cup of tea, but it’s undeniable that she has the chops to be a full-fledged rockstar. Ahead of the arrival of the covers album, Metallica Blacklist, Cyrus enlisted the help of the rock legends during an appearance on The Howard Stern Show.

They performed the classic hit “Nothing Else Matters”.

“When I first started covering this song, it was for Glastonbury, because it is about honoring music, and ‘nothing else matters’ at that moment,” she said. “It was about two weeks before the world knew I was getting a divorce… I had just lost my house in the [California] fires.”

“I was so heartbroken and my purpose was coming from this performance. I got sober at that time. I really pulled my fucking shit together,” she added. “This song was what drove me to that place, because I knew nothing else mattered. My life in regards to love was falling apart, but I had my love for music.”

Cyrus performed the song at Glastonbury Festival in 2019. Watch their amazing performance on The Howard Stern Show below.