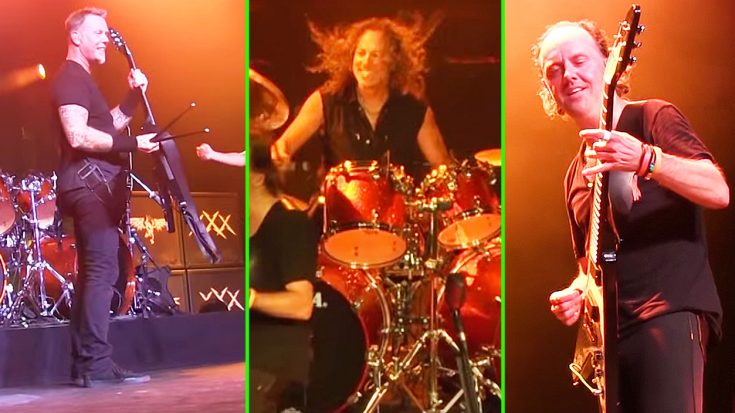 Following their panel at ComiCon 2013 in San Diego,CA, Metallica headed over to the Spreckels Theater to put on a secret, exclusive show for all of their fans! As the late-night show was winding down, Metallica used the last few minutes of their set to goof off before their encore song. Drummer Lars Ulrich and guitarist Kirk Hammett used the lighthearted moment as a chance to pull the old switcheroo, and swapped their respective instruments!

Fun Facts:After recording ‘Kill ‘Em All,’ Kirk Hammett decided to hone his shredding skills by taking lessons from guitar virtuoso Joe Satriani. Also, Lars Ulrich has only been recorded playing drums for one other band. On Mercyful Fate’s 1993 album, ‘In the Shadows,’ Ulrich lent his skills to the track ‘Return of the Vampire … 1993.’

To us, Lars does not look natural with a guitar, and neither does Kirk behind a drum kit! We’re glad that they’ve both stuck with the instruments they know best. Lars attempts to put together a decent riff, and Kirk just lays down the most basic beat ever. Neither have much to show for away from their own normal instruments. However, it’s great to see rockstars have fun like this, cause that’s what it’s all about!

Watch the funny moment for yourself down below.