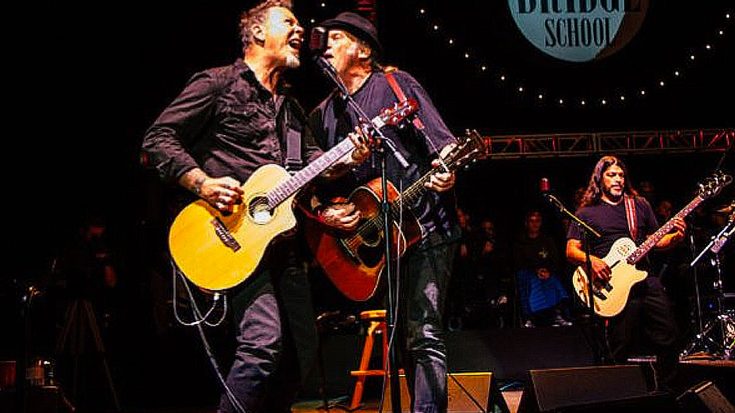 In a world increasingly gone mad, it’s a breath of fresh air to see people coming together in the name of something bigger than themselves, which is what happened this weekend when Metallica joined rock legend Neil Young at his beloved Bridge School Benefit Concert in Mountain View, California. A night of acoustic music from some of music’s biggest legends, The Bridge School Concert benefits The Bridge School, co-founded by Young and his ex wife Pegi after experiencing difficulty finding suitable school placement for their non-verbal son Ben, who suffers from cerebral palsy and sees Neil take the stage every year since 1986 to help raise money.

This year’s concert was an absolute blast as fans got to see Metallica exchange their electric setup for an acoustic one and even share the stage with Neil for a cover of Buffalo Springfield’s “Mr. Soul” that, while admittedly a little imperfect, still made for one hell of a good time had by both the gentlemen onstage and the audience members lucky enough to witness the moment as it happened. Besides – who doesn’t love Neil Young smiling and rocking out in the name of a cause that gives him reason to get up every morning?