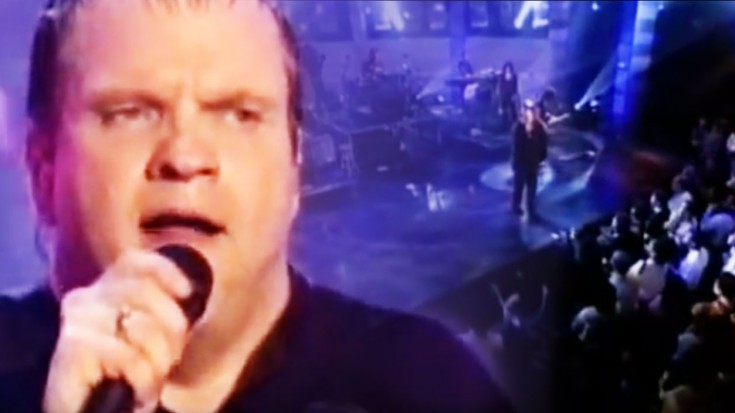 Just as the title “Bat Out Of Hell” hints, the lyrics explain the reckless behavior behind the mirrors of a motorcycle as they tell a story about a rider being thrown from his bike and crashing to his death. Performing his 1977 smash hit,  Meat Loaf wows The Hard Rock in 1998 with a classic performance of the dangerous story lacking his signature mullet and puffy pirate shirt.

“Then I’m down in the bottom of a pit in the blazing sun, torn and twisted at the foot of a burning bike. And I think somebody somewhere must be tolling a bell and the last thing I see is my heart…”

Although Meat Loaf physically appears different, he is better than ever in this live performance – vocally and artistically he is on his game as usual.

Interesting Fact: The motorcycle sound in the middle of the song is producer Todd Rundgren on electric guitar. Todd hated the idea at first, but composer Jim Steinman begged him until he did that and the subsequent solo in one take.

We love Meat Loaf’s original video with the great Patti Russo, but we thought it would be more fun to showcase a more “recent” Meat Loaf to show that he’s still got it! Enjoy this awesome performance!