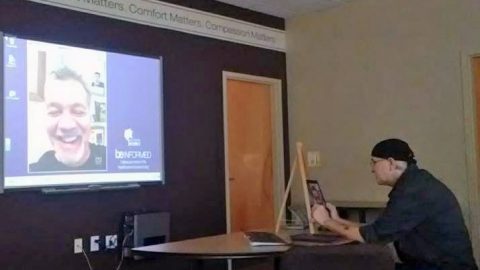 In 2013, Michael Brewer suffered from an auto-immune disorder. After two years, he was diagnosed with COPD and most recently, he received a terminal diagnosis of prostate cancer wherein the doctors found out that it has already spread and metastasized to his bones. Because chemotherapy didn’t work for him anymore, he became set on just living life to the fullest.

The other day, he crossed off one item on his bucket list which is to meet Eddie Van Halen. With the help of the Lower Cape Fear Hospice, his wish was granted. Although he didn’t personally see the legendary rocker, he was able to talk to him via FaceTime after Van Halen called him. His wife Julie shared the touching story and photos on Facebook.

This is perhaps one of the most beautiful things we’ve seen today. It’s a beautiful gesture from Van Halen and we’re sure the Brewer family could never forget this moment.