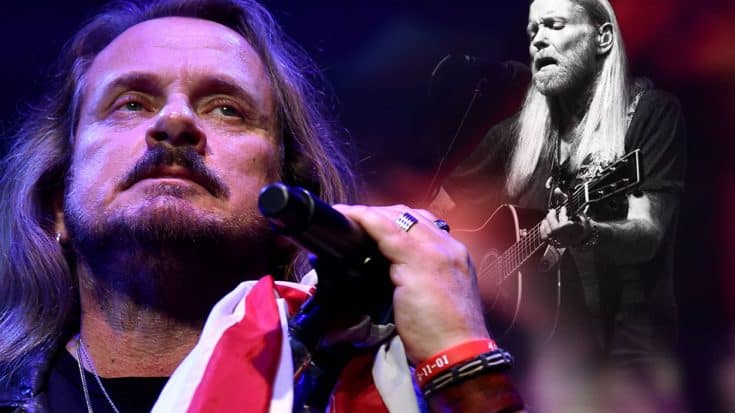 “A Moment Of Silence For Mr. Gregg Allman…”

When life takes a dark, tragic turn, Southern rock legends Lynyrd Skynyrd don’t shy away from it; not by a long shot. They face it head on, feeling the full range of emotions brought on by the loss of a loved one without losing their time honored ability to find the right words so desperately needed by those around them, leaning heavily on each other and the music that brought them together to make it through.

Fans in attendance at Lynyrd Skynyrd’s May 27th show at Valdosta, Georgia’s Wild Adventure Park were witness to this as the band took the stage shortly after receiving word that Gregg Allman had died just two hours away in his native Macon, offering up sweet tribute to the man that many called an idol but who they had the pleasure and privilege of calling a friend.

Johnny Van Zant broke the news to a stunned audience, asking for a moment of silence in Allman’s honor before dedicating the ever iconic anthem “Simple Man” to both he and troops fighting overseas. The tribute was livestreamed to Lynyrd Skynyrd’s official Facebook account where thousands poured in, expressing gratitude at the fact that Lynyrd Skynyrd used the music that’s sustained us and held us for generations to bring comfort during one of Southern rock’s saddest moments. One of our favorite tributes to Gregg Allman’s life and legacy, you can see Skynyrd rocking loud enough to shake the heavens in the video below – check it out, and as always, enjoy!