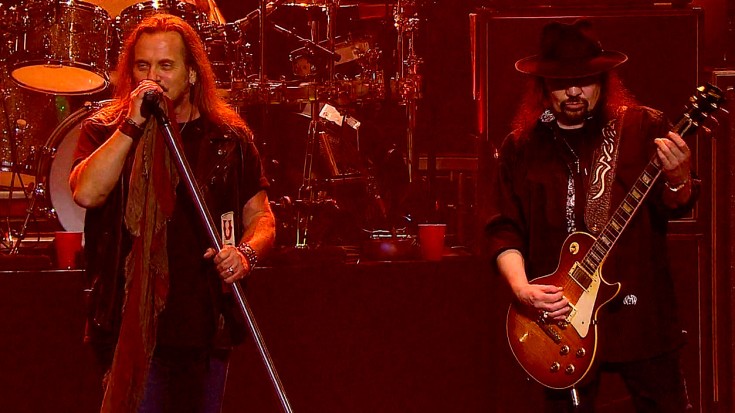 dailymotion.com via EagleRockTV and Lynyrd Skynyrd

Florida’s Favorite Sons Go Back To Where It All Began

When Lynyrd Skynyrd performed an historic 2-night run at Jacksonville’s Florida Theatre earlier this year it featured powerhouse performances of their first two studio albums in their entireties, immortalized on their latest live concert film Pronounced ‘Lĕh-‘nérd ‘Skin-‘nérd & Second Helping Live.  The real gem of the night, however, was none other than the heart and soul of their debut album Pronounced ‘Lĕh-‘nérd ‘Skin-‘nérd, ‘Simple Man’; coming hot on the heels of ‘Gimme Three Steps,’ ‘Simple Man’ brought the crowd to its feet almost immediately and was dedicated with love to Ronnie Van Zant and the other fallen members of Lynyrd Skynyrd.

It’s a performance that means everything. Lynyrd Skynyrd’s a band that’s gone from triumph to tragedy and back to triumph again, but they’ve never once forgotten their humble Jacksonville roots – or what mama taught them.

“It’s mama talking to you in that song and I think it’s probably one of my favorites if not my favorite to do live. It’s just a great song and that one stays in the set and the crowd always goes crazy on that one.”

Never ones to do things by half, Lynyrd Skynyrd absolutely brought the house down with this classic! There’s nothing more magical than watching Florida’s favorite sons go back to where it all began, and to be allowed on that remarkable ride with them – even if it’s just for a night – is an incredibly special thing indeed!

Buy it here on Amazon!