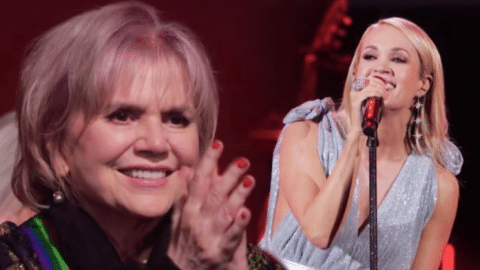 As part of the event, several tributes for each honoree were done including Tom Hanks who gave a moving speech to his onscreen mom, Field, from the movie Forrest Gump. But one of the, probably, stand-out moments was during the tribute to Ronstadt.

Carrie Underwood did the honor to pay tribute to a woman who she said “broke the rules and sang music that was true to her.” Underwood was witnessed performing the “Blue Bayou” while wearing an eye-catching blue sparkly dress. “Blue Bayou” was originally written and sung by Roy Orbison, but Ronstadt covered it in 1977. After she finished the song, Underwood then sang “When Will I Be Loved,” which the legend released in 1975.

Underwood has already sung this song in Ronstadt’s honor back in 2014. Together with Bonnie Raitt and Emmylou Harris, the “Cry Pretty” singer played “Blue Bayou” at the legend’s Rock & Roll Hall of Fame induction that year. On December 15, 2019, the ceremony was broadcast on CBS, and Ronstadt could be seen grinning the entire time of the performance.

Watch Underwood’s 2019 performance in the video below.