Les Paul, Eddie Van Halen, David Gilmour, and Stray Cats Will Give You Goosebumps In This “Blue Suede Shoes” Jam 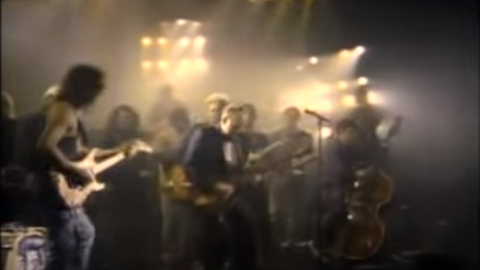 A Heaven For All Ax Wielders

We’re big fans of all-star lineups. So when we saw Les Paul sharing the stage with Eddie Van Halen, David Gilmour and the Stray Cats, it’s probably one of the most incredibly eargasmic moments in the history of music.

1988 was a big year for Lester William Polsfuss or more popularly called Les Paul. He was inducted into the Rock and Roll Hall of Fame and the TEC Hall of Fame. He’s had a long and illustrious career and has given a huge contribution into the evolution of guitar. He pioneered several things including multitrack recording, slap echo and of course, the iconic electric guitar.

In August 18, the “Wizard of Waukesha” performed with various legends during the Les Paul Tribute Concert held at the Brooklyn Academy Of Music. At the time of the historical commemorative gala, he was 73 years old. He’s a celebrated musician and performer and this insane jam proves why he’s one of the best.

Don’t we all wish we witnessed this otherworldly performance?