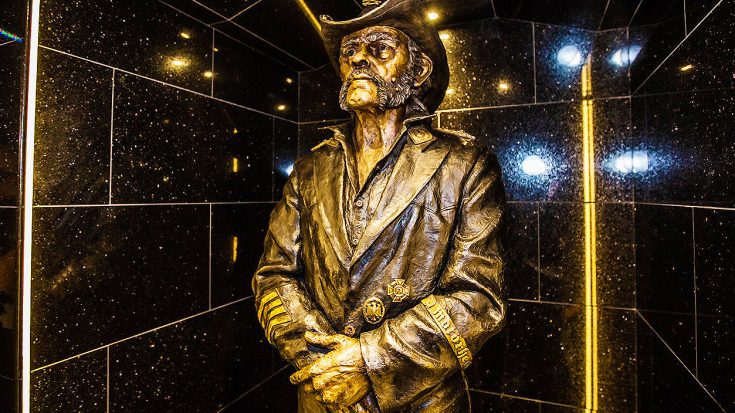 An honor only fitting for a king

The Rainbow Bar & Grill on Sunset Blvd. in Hollywood, California was a second home to the late rock legend Lemmy Kilmister. Many would say that at any hour, or any day you could walk in there and there would be a good chance you’d run into the Mötorhead frontman, sipping on his personal drink of choice: a Jack and Coke. Lemmy loved “The Rainbow” so much that he lived in a small apartment just a few blocks from the establishment. Since Lemmy’s passing, bar decided to honor Lemmy in the best way they could: a life size bronze statue of their hero, and favorite patron.

The bar hired Los Angeles-based artist Travis Moore to take on the task, and utilized crowd funding as a means for completing the project. Over 900 people contributed to the effort, and the end result is a beautiful shrine to Lemmy. There are already plans to cast an additional statue of a bass amp, which will done all 900 names of the people who assisted in funding the project. Representatives of Mötorhead opted to distance themselves from the project, stating that it was “not corporate” and for the fans, therefore they didn’t want to get in the way.

The statue is a pretty accurate representation of Lemmy! Moore pretty much nailed his look, and also added some color to the statue as well. What makes it so great is the fact that it’s so detailed that it gives Lemmy his signature rugged look, instead of a squeaky clean representation. The good thing is the statue is bronze, so it won’t rust.

So next time you’re in Hollywood stop by the Rainbow, order a Jack and Coke, take a picture with the statue and pay your respects to Lemmy!

You can watch a video of yesterday’s festivities at The Rainbow Bar & Grill down below!