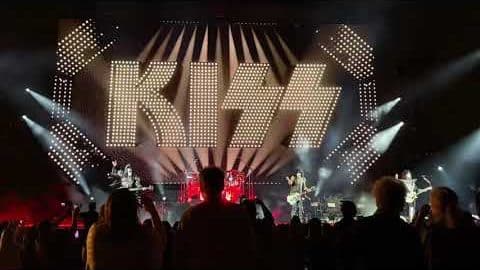 KISS played a five-song set at the Tribeca Film Festival in New York’s Battery Park – a teaser when they hit the road again in a few weeks. Their mini concert featured the band in full makeup complete with moving stage platforms and of course, pyrotechnics. It came after a screening of the upcoming A&E two-part documentary Biography: KISStory that premieres on June 27 and 28.

“After 50 years of rocking and rolling all night and partying every day,” the description on the four-hour film reads, “the #1 Gold Record selling band of all time, KISS, shares their story of success before finally smashing their last guitar and extinguishing the fire-breathing demon.”

They performed “Detroit Rock City,” “Shout It Out Loud,” “Rock and Roll All Nite,” “Heaven’s on Fire,” and “War Machine.”

“We don’t have a permit to make a long show. So this is a little short,” Paul Stanley told the audience. “It’s like a sampling before you get your big meal in August.”

In August, KISS will resume their farewell tour which was derailed by the pandemic. They also have another upcoming biopic titled “Shout It Out Loud” which might air on Netflix.