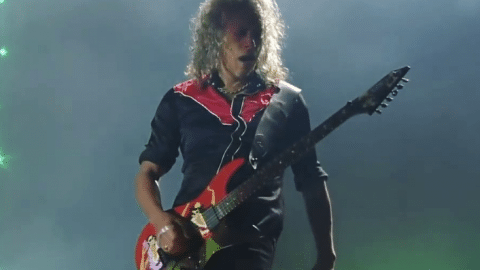 Metallica guitarist Kirk Hammett showers praises for multi-instrumentalist Tye Trujillo, son of Metallica’s bassist Robert Trujillo, as the 17-year-old rockstar’s contribution to the riff for the mix of Metallica’s classic “Master of Puppets” was featured on Stanger things 4 and was skyrocketed on the finale.

Tye, who’s usually a bass player, rocks harder and showed off his skills as he played with more than four strings. On Instagram, July 6, Hammett posted a photo of him together with the young musician, along with the caption:

“Very proud of my little bro Tye Trujillo who pulled off the lead to Master of Puppets for the Netflix show Stranger Things.

“He’s not a guitar player but a bass player just like his pop! Impressive!”

The Stranger Things’ character Eddie Munson had a key scene shredding on the guitar which featured the 1986 record “Master of Puppets” on the famous Netflix Series’ Season 4 two-part finale which premiered last week (July 1). The track was also a part of the most latest Stranger Things Soundtrack, which had featured some adrenalizing picks by KISS, Journey, Talking Heads and more.

Tye currently performs with his own band called OTTTO, who in the past sat in with Korn and Suicidal Tendencies. Robert told about his son’s participation in the show, writing:

“That’s my boy! Proud of ya Tye! Stranger Things finale shredding it on ‘Master of Puppets’ and big thanks to @kirkhammett on helping!”