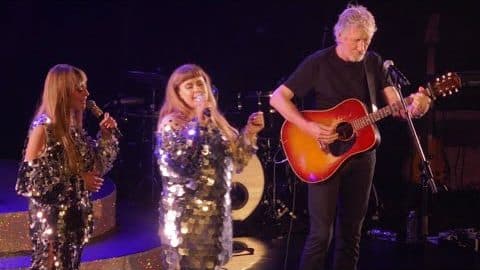 Pink Floyd’s co-founder sang “Mother” on his show last May 4 at the Beacon Theatre in New York. He originally wrote the song that appears on The Wall album, which was released in 1979. Waters once told Mojo magazine on December 2009 about the song:

“If you can level one accusation at mothers, it is that they tend to protect their children too much. Too much and for too long. This isn’t a portrait of my mother, although one or two of the things in there apply to her as well as to I’m sure lots of other people’s mothers.”

He then admitted that the overly protective mother portrayed in the song has some similarities to his own mom, saying:

“My mother was suffocating in her own way. She always had to be right about everything. I’m not blaming her. That’s who she was. I grew up with a single parent who could never hear anything I said, because nothing I said could possibly be as important as what she believed. My mother was, to some extent, a wall herself that I was banging my head against. She lived her life in the service of others. She was a school teacher. But it wasn’t until I was 45, 50 years old that I realized how impossible it was for her to listen to me.”

Waters’ was joined by Lucius onstage for the performance. Watch the video below.