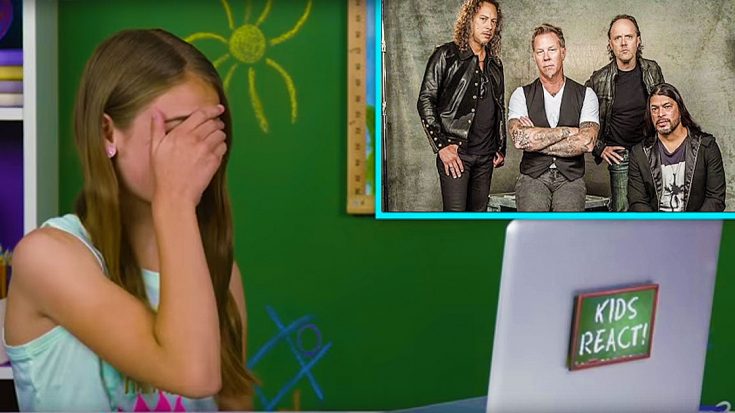 “I Think I Saw Kylie Jenner Wearing Their Shirt Once…”

Good grief. We knew that the state of music was terrible, but we never knew it was this bad! A few months ago we reported on a video called Kids React: The Beatles and were pleasantly surprised when the children not only knew who The Beatles were, but expressed delight at hearing certain songs. Whether it’s due to the rise of games like Rock Band and Guitar Hero we’ll never know, but hey – we’ll take it!

In the case of this week’s installment entitled Kids React: Metallica, we’re in for a whole different ballgame as not only do most of the children featured have zero clue who Metallica are, their reactions to songs like 2016’s “Hardwired” are downright depressing.

“Are there…lyrics, in this song?”

“I’m guessing this is like the Rolling Stones or something, I don’t know.”

“I don’t think this classifies as music. It’s hard to believe that people actually listen to that.”

“I think I saw Kylie Jenner wearing their shirt once…”

It’s not all gloom and doom though and all is not lost; a handful of children actually really, really liked Metallica’s older stuff like “One” and “Enter Sandman” and even if they weren’t particularly fond of the song itself, they appreciated the passion and creativity that went into creating these songs versus, say, your average Top 40 hit on the radio (we’re looking at you, J. Biebs). If you look closely, you can even spot the moment that certain kids became future rockers by the way their eyes lit up after hearing something they’d never heard before (including the little girl who gave a shoutout to Kirk Hammett’s guitar playing) – I’d call that a win!