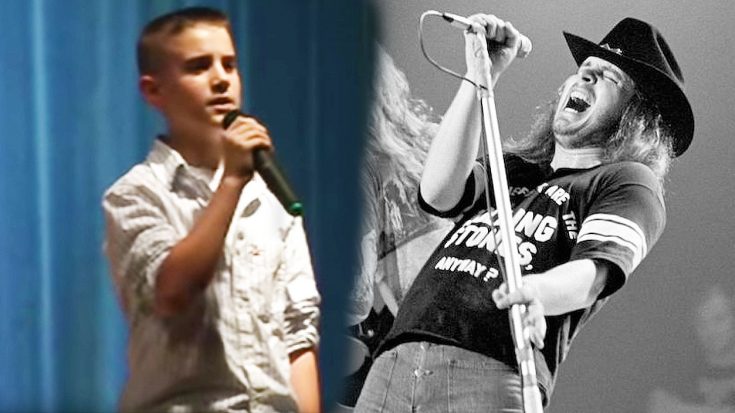 This kid is unreal!

We all know that Lynyrd Skynyrd’s Ronnie Van Zant had one of the most incredible voices in rock n’ roll history! His southern rock voice was iconic, and paved the way for so many artists in not only the rock genre, but also the country music genre as well!

One Skynyrd song that really showcases Ronnie’s incredible voice is the song “Simple Man.” Although the song is called “SIMPLE Man,” The song is far from simple to sing, and this young man proved that! His name is Noah, and for his school’s talent show, he decided to take on this difficult song, and absolutley killed it! His voice is pretty phenomenal, and for his age, he gives the song a pretty good run!

Fun Fact: Shortly after Ronnie Van Zant’s grandmother and Gary Rossington’s mother died, they got together in Van Zant’s apartment and started telling stories about them. Rossington came up with a chord progression, and Van Zant wrote the lyrics based on advice the women had given them over the years. They wrote it in about an hour.

The scary part about this cover, is that this kid’s voice is only going to get better! We can’t wait to hear him once he gets older, so hopefully he covers this song once again! Ronnie would definitely be proud that he inspired this kid!