Keith Richards’ 1978 “Some Girls” Guitar Is Headed To Auction 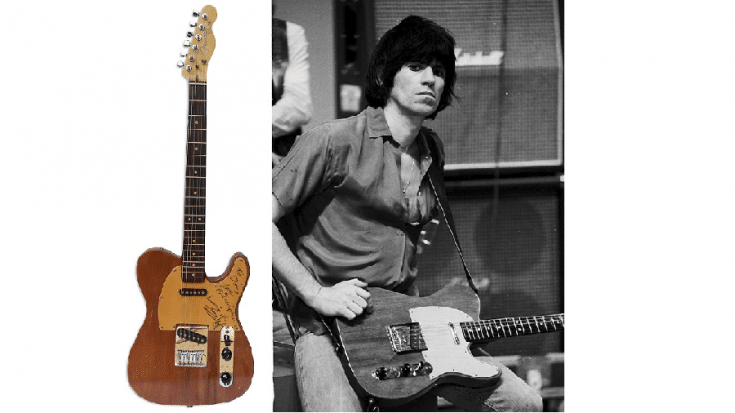 Bidding Starts At A Whopping $1.2 Million

Keith Richards’ custom-made telecaster-style guitar is headed to auction on September 24 in Los Angeles. Hosted by Nate D. Sanders Auctions, it has a minimum bid of $1.2 million.

Throughout the ’70s, Ted Newman Jones produced several guitars for Richards including this particular one with Telecaster-style body and a Fender rosewood Telecaster neck. Richards played it throughout the recording sessions for “Some Girls”, during The Rolling Stones 1978 American tour, and in the music videos for “Miss You” and “Far Away Eyes”.

The veteran rocker later signed and inscribed it with: “To Doc, Love & Prescriptions / Keith Richards.”

The guitar includes a Letter of Authenticity by Andy Babiuk that reads, “This instrument was a guitar that Newman built for Keith copying the style of a Fender Telecaster body and using an actual Fender Telecaster Rosewood Model neck…Keith used the guitar as Newman originally built it for the Rolling Stones Some Girls recordings, video and on the 1978 Some Girls tour.”

He also adds its rich history, “In 1981, The Who’s guitar tech Alan Rogan started working with the Stones…Rogan had David Schecter built a Telecaster body made of rosewood and took the neck off the Newman Custom Built Telecaster and made a new Rosewood Telecaster guitar for Keith to use on the tour. The Newman built ‘Telecaster style’ body was given to Schecter who fitted it with a Fender Tele style neck and a new bridge / pickup assembly.”