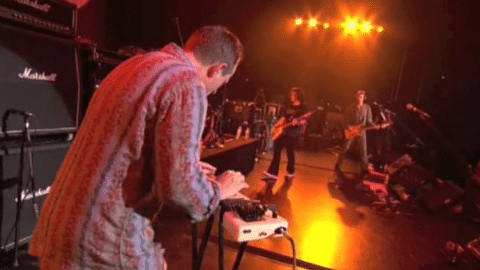 John Paul Jones may have been content to blend in the background during Led Zeppelin’s heyday but everyone will agree that he’s the band’s secret weapon. His bandmates were flashier and wilder on stage but even so, JPJ’s genius cannot be ignored and overlooked. His musicianship and immense talent put him up there along with some of the greatest rock acts of all time.

And in 2004, JPJ was part of Guitar Wars in Japan in celebration of the 20th anniversary of their Hard Rock Cafe. The lineup included Extreme’s Nuno Bettencourt, Genesis’ Steve Hackett, and Mr. Big’s Paul Gilbert.

‘When The Levee Breaks’ was originally recorded by Kansas Joe McCoy and Memphis Minnie. Led Zeppelin covered it and featured the classic on their magnum opus – the group’s untitled fourth album. Prior to that, however, they already attempted to record it twice but unsuccessfully so. It was challenging to record in the studio but even more difficult to recreate in a live setting which is why they rarely played it at their shows and concerts.