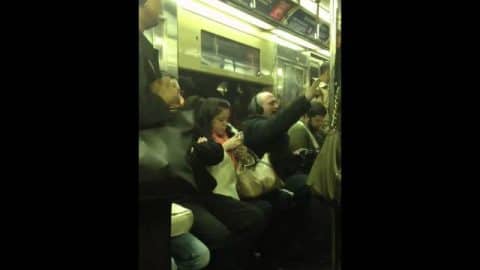 Drunk guy singing Queen’s epic masterpiece Bohemian Rhapsody is nothing new. Besides, it’s one of everyone’s go-to karaoke song right? Remember the drunk Canadian who got arrested for disorderly behavior and then proceeded to sing the song in its entirety at the back of a police car? That’s just one example.

Back in 2013, a man decided to drink a giant can of beer in a New York City subway. With his confidence bolstered by the alcohol, he happily belted out to Bohemian Rhapsody without a care about the other passengers. Because let’s be honest, whether you’re inebriated or not, you JUST HAVE TO sing along to this timeless classic.

And YouTube user Amal Doleh recorded him singing and then uploaded it on YouTube. Of course it went viral almost immediately. This was even reported in news shows CBS and MSNBC.

He’s apparently so committed to his impromptu performance that he even “sang” Brian May’s iconic guitar solos. Also, kudos to those beside him who somehow managed to keep a straight face all throughout. It’s not every day that you get serenaded in the train.

Bohemian Rhapsody was inducted into the Grammy Hall of Fame in 2004 and remains as one of the most streamed songs today.