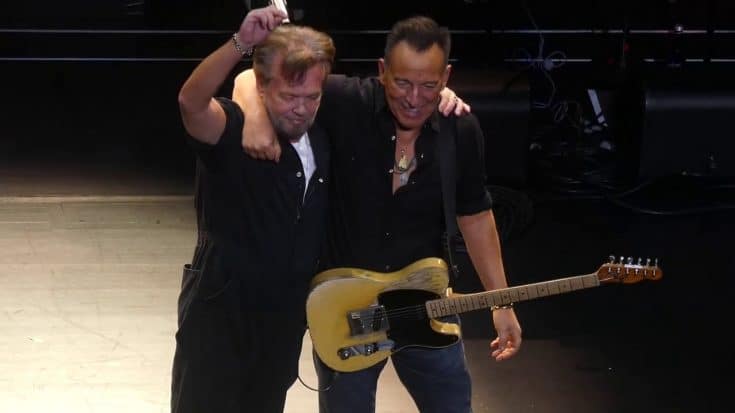 Bruce Springsteen and John Mellencamp joined forces together and took the stage at the Rock & Roll Hall of Fame induction ceremony.

The two have welcomed record executive Jimmy Iovine and entertainment lawyer Allen Grubman. After speaking in a pre-recorded video honoring Iovine, Springsteen appeared. The record executive started his career as a recording engineer and has worked with such acclaimed artists as John Lennon, Tom Petty, Stevie Nicks, and U2.

He also engineered two of Springsteen’s albums, Born to Run in 1975 and Darkness of the Edge of Town in 1978. Like Iovine, Grubman was also inducted into the Rock & Roll Hall of Fame via the Ahmet Ertegun Award. The Ahmet Ertegun is an honor bestowed on non-performing music industry professionals who “have had a major influence on the creative development and growth of rock and roll and music that has impacted youth culture.”

Grubman has served as an entertainment lawyer to some of the biggest names in music, including Springsteen, Madonna, Rod Stewart, Elton John, Jennifer Lopez, and the man who inducted him, Mellencamp for more than 50 years.

However, Grubman’s induction was surrounded by controversies for he is the first lawyer to be inducted into the hall. Mellencamp’s speech included a signature memory in which Grubman compared the music industry to a “great big motherfucking tree” that remains “massive and unbending. On this tree are a bunch of apples. A few stays firmly attached, but most of the apples, I’m sorry to say, they shrivel up and drop to the ground … sadly forgotten.”

During Mellencamp’s speech, he said that Grubman made sure he was one of those that remained attached, Mellencamp then made a statement about his stand against the shocking resurgence of antisemitism. After that, Springsteen returned to close out the night with a thunderous tribute to the late Jerry Lee Lewis.

The two performed on stage “High School Confidential” and “Great Balls of Fire.” Check out the video below.