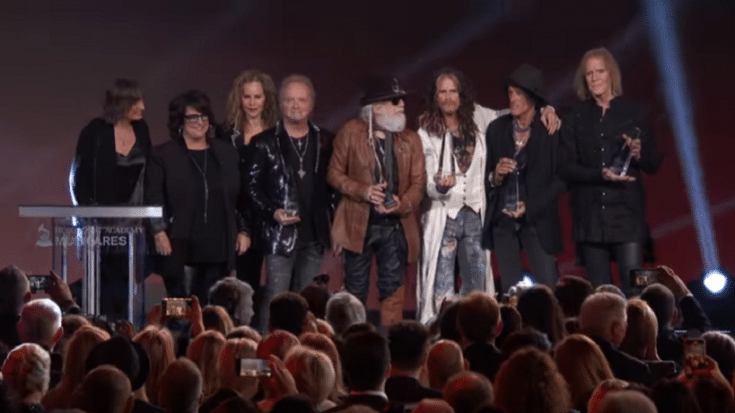 During the 30th Anniversary MusiCares benefit gala held at the Los Angeles Convention Center on Friday night, Aerosmith accepted the 2020 MusiCares Person of the Year award and Joey Kramer was also present, even amid the lawsuit he filed against his bandmates. While Kramer joined them at the podium, he did not perform with the group but he was allowed to make a speech following frontman Steven Tyler.

Kramer told the audience, “A shoutout for love and gratitude — to MusiCares, to all our fans, to my partners, to my forever-supportive wife Linda, and to you guys out there and the music industry.”

Aerosmith performed four songs (“Big Ten Inch,” “Sweet Emotion,” “Dream On,” and “The Train Kept A Rollin’” with Hollywood Vampires’ Johnny Depp and Alice Cooper) with drummer John Douglas behind the kit. While touching Kramer’s shoulder, Tyler also said: “Remember, people only really get interesting when they start to rattle the bars on their cages. And the best way to make your dreams come true is to wake up.”

During the performance, Tyler shouted: “Joey Kramer, where are you? We love you, man!”

But days prior, Kramer was actually barred from their rehearsal. Gossip outlet TMZ posted a clip of Kramer trying to enter the rehearsal space but was turned away by two security guards.

#joeykramer speaks at #musicares with #aerosmith. He was the only one besides #steventyler who gave a speech.